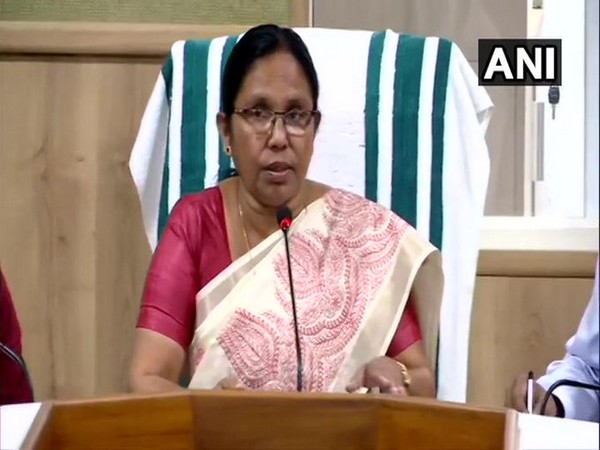 Thiruvananthapuram (Kerala) [India], June 15 (ANI): Kerala reported 82 new confirmed cases of COVID-19 on Monday, state Health Minister KK Shailaja said.
There are 1,348 active cases while 1,174 patients have been recovered from the virus in the state, the officials said.

“Of these 82 cases reported today, 49 persons have come back from abroad (UAE-19, Kuwait-12, Saudi Arabia-9, Qatar-5, Oman-2, Nigeria-2) and 23 from other states (Maharashtra-13, Tamil Nadu-4, Delhi-3, Rajasthan-1, West Bengal-1 and Telangana-1). Nine people have got infected through primary contact, two each in Kottayam, Palakkad, Alappuzha and Thrissur districts, and one from Malappuram district,” said the Minister during a daily briefing on COVID-19.
The Minister said that the 73 patients who were undergoing treatment for COVID-19 tested negative today.
“21 patients from Kannur district, 12 in Palakkad district, 11 from Kollam district, 10 in Malappuram district, six from Thrissur district, four each in Kozhikode and Kasargod districts, three from Thiruvananthapuram district and two in Ernakulam district are those who were cured of the infection. Till now, 1,174 patients have recovered from COVID-19 and 1,348 are presently under treatment for the same,” She added.
She further added, “13 people in Ernakulam district, 11 from Pathanamthitta district, 10 each in Kottayam and Kannur districts, seven from Palakkad district, six each in Malappuram and Kozhikode districts, five from Alappuzha district, four in Kollam district, three each from Thrissur and Kasargod districts, two in Idukki district and one each from Thiruvananthapuram (including the dead) and Wayanad districts are those who tested positive of Coronavirus.”
According to the Minister, there has been a considerable drop in the number of people under quarantine in the State as 1,29,971 persons have completed their 14 days quarantine.
“Currently, a total of 1,20,727 people are under surveillance in various districts. Of these, 1,18,704 are under observation at their homes or institutional quarantine centers and 2,023 are in isolation at hospitals. 219 people were admitted to hospitals today,” said the Minister.

The state has declared five new hotspots whereas two have been excluded from the list. At present, there are 125 hotspots in Kerala. The new hotspots are one each in Kasargod and Kannur districts, and three in Thrissur district. (ANI)

Mumbai airport to operate 100 flights per day from June 16