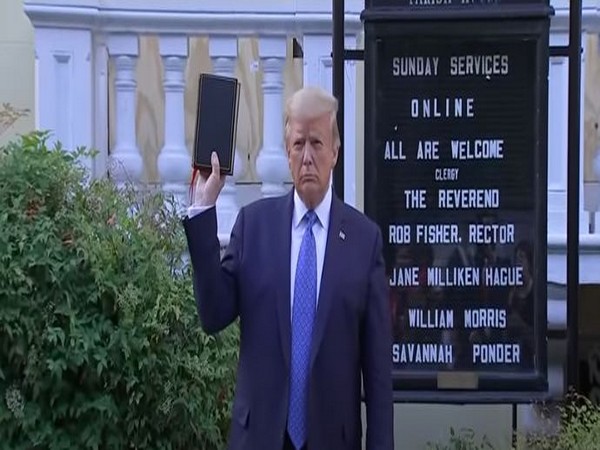 Washington D.C. [USA], June 14 (ANI): The US Secret Service on Saturday (local time) has reported that an agency employee used pepper spray on the anti-racism protesters on June 1 to clear the Lafayette Square ahead of President Donald Trump’s photo-op at a local church.
“Released information stating the agency had concluded that no agency personnel used tear gas or capsicum spray during efforts to secure the area near Lafayette Park on Monday, June 1, based on the records and information available at the time. Since that time, the agency has learned that one agency employee used capsicum spray (i.e., pepper spray) during that effort,” CNN quoted the statement released by the Secret Service.
It further read: “The employee utilized oleoresin capsicum spray, or pepper spray, in response to an assaultive individual.”
Trump had faced widespread criticism after he stood outside St John church in Washington for minutes holding a Bible in his right hand on Monday — just after police cleared his route from protesters demonstrating peacefully using tear gas and flash grenades.
In video footage obtained by the New York Times on Monday before Trump headed to the church, protesters can be seen fleeing as flash grenades ignite and tear gas fills the street — despite the fact that the demonstration had been peaceful.
The last couple of weeks saw worldwide protests demanding justice for George Floyd, a 46-year-old African-American, who died shortly after a police officer knelt on his neck for eight minutes and 46 seconds. (ANI)

World Test Championship hasn’t achieved what it intended to do: Greg Barclay

A year on, citizen science is powering Covid-19 research

Ronaldo is the best at the moment: Pele