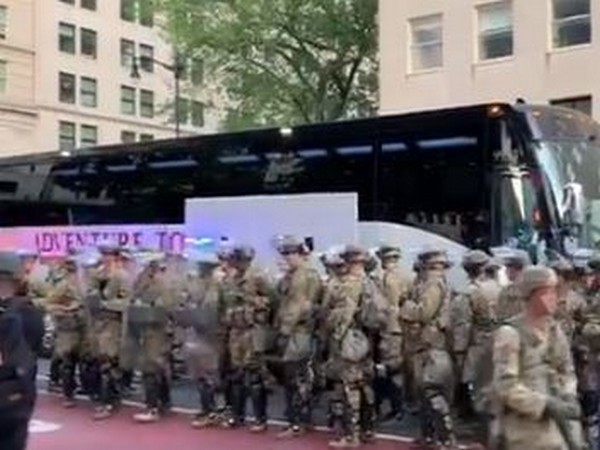 Washington D.C. [USA], June 4 (ANI): US Military forces were on Wednesday seen on the streets of Washington, DC, and put on a high alert to respond to unrest in the nation’s capital if necessary.
Videos floated on social media by the local media channels showed busses carrying American soldiers arriving in Washington.
Defence officials told CNN on Wednesday that there was deep and growing discomfort among some in the Pentagon even before President Donald Trump announced on Monday that he is ready to deploy the military to enforce order inside the United States.
As tear gas wafted through the air in Lafayette Park across from the White House, Trump announced from the Rose Garden that if state or city leaders refuse “to take the actions that are necessary to defend the life and property of their residents,” he will invoke the Insurrection Act, an 1807 law that allows a President to deploy the US military to suppress civil disorder.
The President, who faces a climbing death toll from the coronavirus pandemic and uncertain re-election prospects in November, is now emphasising law, order and a military response against American citizens, the officials told CNN further.
Defence Secretary Mark Esper reached out to Governors in several states in search of National Guard troops to help contain the security situation in Washington, DC, and while some offered support, Governors in Virginia, New York, Pennsylvania and Delaware declined the request.
States cited the need to keep their Guards in the state, a discomfort that the Guards would report to Attorney General William Barr and not local authorities as well as with Trump’s call for force to be used in a “dominating” response to protestors, the officials told CNN.
A Department of Defence spokesman confirmed on Tuesday morning that New York the National Guards were expected to move to DC last night, but Governor Andrew Cuomo withdrew his permission. Another Pentagon official told CNN that support was expected from Delaware as well, but the state diverted the troops back to Wilmington.
In Virginia, an official with direct knowledge of the deliberations was quoted as saying that Governor Ralph Northam decided not to send troops after Washington Mayor Muriel Bowser and her team told Virginia officials that they had not requested additional assistance.
Looting and rioting have marred the streets of the US Capital and several other cities that began last week after the killing of George Floyd, a black man who was being taken into custody by police in Minneapolis. (ANI)

Israel fumes over Unesco resolution on excavations in Old…

In throes of flux, Congress likely to hold party chief…