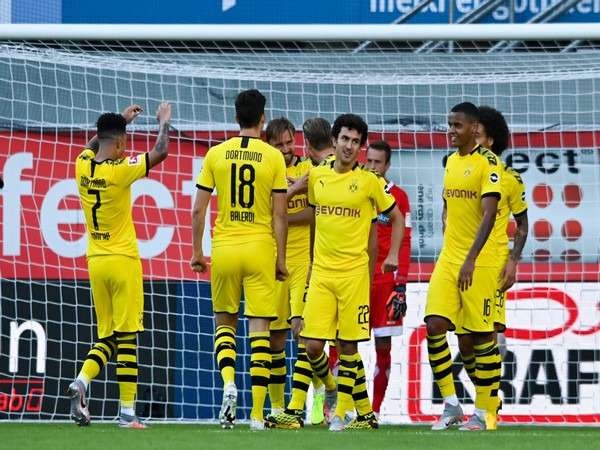 Paderborn [Germany], June 1 (ANI): Borussia Dortmund registered a massive 6-1 victory over SC Paderborn in the ongoing Bundesliga here on Sunday.
After being beaten by the top-placed club Bayern Munich on May 26, Borussia Dortmund made a stunning comeback to pick up their third victory in the last four games since the resumption of the league.
The first half witnessed a tough competition between both the side as no club managed to take a lead. However, Borussia Dortmund came out furiously in the second half to thrash their opponents.
Jadon Sancho netted a sumptuous hat-trick, scoring a goal in the 57th, 74th and 92nd minute of the game.
The opening goal of the match was scored by Thorgan Hazard in the 54th minute. Achraf Hakimi and Marcel Schmelzer also scored one goal each. Uwe Hunemeier scored the only goal struck by the SC Paderborn’s side through a penalty.
The second-positioned club, Borussia Dortmund are now only seven points behind Bayern Munich and will next take on Hertha BSC on Saturday. (ANI)