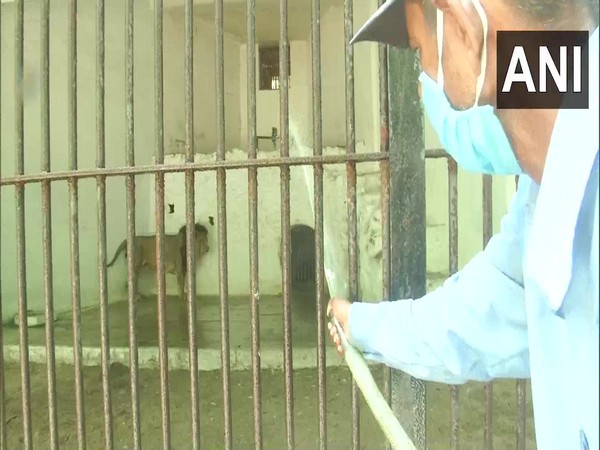 Vadodara (Gujarat) [India], May 30 (ANI): As the mercury soars and heatwave intensifies, the Sayaji Baug Zoo at Vadodara has made arrangements for the inmates to beat the heat.
Zoo curator Dr Pratyush Patankar has said that water is being sprayed in and around cages of animals two times a day, and ice cubes are also being put in the cages of some animals for providing them relief.
Talking about the measures taken by the zoo, Pratyush Patankar said, “There has been a heatwave warning and it has been going on from a week, and in the city too, the temperatures have crossed 40 degrees Celsius. We have taken all measures to protect the animals from the heat, especially water arrangements. Other than the drinking water, we spray water inside and outside the cages of animals and birds for a cooling effect.”
“To cover the cages, we have put green agro net grass curtains and dry coconut tree leaves, and water is sprayed on that so that the cooling effect lasts. We provide ice to the animals, we have a Himalayan bear who is from a cold area, and he is given big ice slabs for cooling. We also put ice cubes in leopards’, lions’ and monkeys’ cages for cooling,” said Patankar.
“Monkeys, bears, and birds are provided with fruits and vegetables that have water contents such as watermelon, etc. that are available in the summer seasons, in order to avoid dehydration. Usually, animals are active early morning and in the evening, and animals prefer to rest in the afternoon. Animals stay active in the night and early morning, and they prefer to rest in the day time,” added Patankar
Patankar further said that in the absence of the public due to the lockdown, the animals are getting a quiet atmosphere and positive behavioural changes in the animals have been noticed. He added that the breeding results in the birds are good, and he hopes that due to fewer disturbances, good breeding results will be received. (ANI)