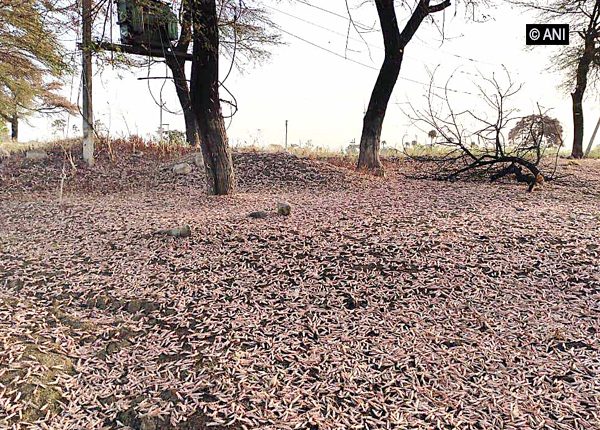 New Delhi [India], May 28 (ANI): The Delhi government on Thursday issued an advisory on preventative measures to tackle the probable locust attack in the national capital, following the havoc created in parts of North India due to the swarm invasion.
All the concerned officials have been advised to organise awareness programs for farmers and the public to control and eradicate any devastating effect on agricultural and horticultural crops, vegetation, plants, gardens, and orchards.
In a meeting convened by Delhi Labour Minister Gopal Rai at his residence on Thursday, the officials reviewed the locust menace which is likely to head towards Delhi.

The concerned authorities are allowed to carry out spraying of insecticides/pesticides, as per the need during the night, stated the advisory.
The preventative measures issued by the approval of Secretary-cum-Commissioner (Development), Delhi, also stated the names of specific chemicals and their dosage which are permitted.
Melathion 50 EC, Melathion 25 WP, Chloropyriphos 20 EC, and Chloropyriphos 50 EC are the only chemicals which have been authorised for use.
The locust swarm are reportedly present in the neighbouring states such as Uttar Pradesh, Madhya Pradesh, and Rajasthan. (ANI)

Don’t like Simeone’s tactics but he is a great…