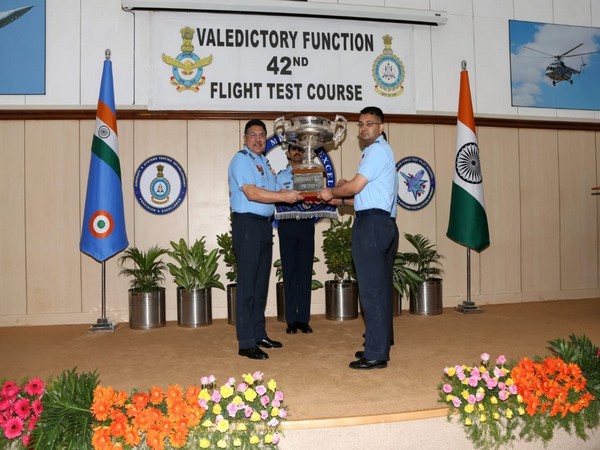 Bengaluru (Karnataka) [India], May 23 (ANI): Eleven Test Pilots and two Flight Test Engineers of the 42nd Flight Test Course graduated from the Air Force Test Pilots School (AFTPS), here on Friday.
Air Marshal AS Butola, Air Officer Commanding-in-Chief, Training Command, was the Chief Guest at the graduation ceremony.
“He (Butola) emphasised on the need to be committed to ensuring that the systems cleared for induction met the operational requirements so that they were inducted within the shortest possible time with optimum utilization of resources,” said an official statement.
The passing out officers will join the prestigious and elite club of ‘the few and the proud’ comprising 297 Test Pilots and 135 Flight Test Engineers that have passed out from AFTPS since its inception in 1973.
The ‘Suranjan Das Trophy’ for the best all-round student test pilot was awarded to Squadron Leader Dipankar Das while the ‘Chief of Air Staff Trophy’ for the best student test pilot in Flight Evaluation was awarded to Squadron Leader V Logesh.
The ‘Kapil Bhargava Trophy’ for the best student in ground subjects was awarded to Squadron Leader Sumit Kumar.
To date, 297 Test Pilots and 135 Flight Test Engineers have graduated from this prestigious institute. (ANI)

180 migrant labourers to be airlifted to Raipur from Bengaluru

Railway refunds Rs 1,885 cr to passengers against cancellation of trains due to…

Smriti Irani thanks PM Modi for approving setting up of EGoS, PDCs in ministries

Jharkhand to have its first medical university

Culprits will be brought to book, says CM Vijayan on Kerala elephant death

Let’s treat our animals with love and bring an end to these cowardly acts: Virat Kohli on pregnant…

US will ship first tranche of 100 ventilators to India next…