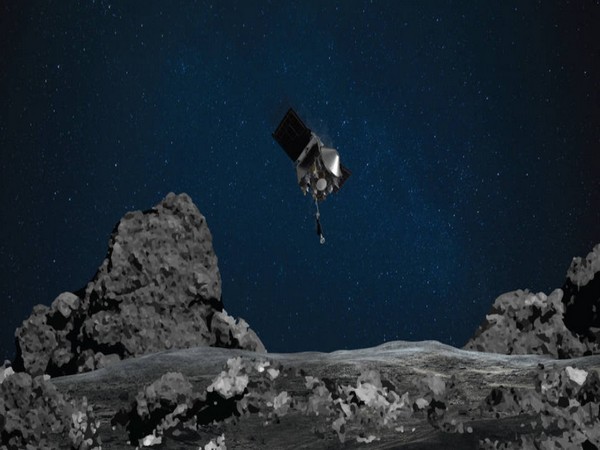 Washington DC [USA], May 21 (ANI): NASA’s first asteroid sample return mission is officially prepared for its long-awaited touchdown on asteroid Bennu’s surface.
The origins, spectral interpretation, resource identification and security-regolith explorer mission has targetted October 20 for its first sample collection attempt.
“The OSIRIS-REx mission has been demonstrating the very essence of exploration by persevering through unexpected challenges,” said Thomas Zurbuchen, NASA’s associate administrator for science.
“That spirit has led them to the cusp of the prize we all are waiting for — securing a sample of an asteroid to bring home to Earth. I am very excited to follow them through the home stretch,” Zurbuchen added.
From discovering Bennu’s surprisingly rugged and active surface to entering the closest-ever orbit around a planetary body, OSIRIS-REx has overcome several challenges since arriving at the asteroid in December 2018.
Last month, the mission brought the spacecraft 213 feet (65 metres) from the asteroid’s surface during its first sample collection rehearsal — successfully completing a practice run of the activities leading up to the sampling event.
Now that the mission is ready to collect a sample, the team is facing a different kind of challenge here on Earth.
In response to COVID-19 constraints and after the intense preparation for the first rehearsal, the OSIRIS-REx mission has decided to provide its team with additional preparation time for both the final rehearsal and the sample collection event.
Spacecraft activities require significant lead time for the development and testing of operations. Given the current requirements that limit in-person participation at the mission support area, the mission would benefit from giving the team additional time to complete these preparations in the new environment.
As a result, both the second rehearsal and the first sample collection attempt will have two extra months for planning.
“In planning the mission, we included a robust schedule margin while at Bennu to provide the flexibility to address unexpected challenges,” said Rich Burns, OSIRIS-REx project manager at NASA’s Goddard Space Flight Center.
“This flexibility has allowed us to adapt to the surprises that Bennu has thrown at us. It is now time to prioritise the health and safety of both team members and the spacecraft,” Burns added.
The mission had originally planned to perform the first Touch-and-Go (TAG) sample collection event on August 25 after completing a second rehearsal in June.
This rehearsal, now scheduled for August 11, will bring the spacecraft through the first three maneuvers of the sample collection sequence to an approximate altitude of 131 feet (40 metres) over the surface of Bennu.
The first sample collection attempt is now scheduled for October 20, during which the spacecraft will descend to Bennu’s surface and collect material from the sample site Nightingale.
“This mission’s incredible performance so far is a testament to the extraordinary skill and dedication of the OSIRIS-REx team,” said Dante Lauretta, OSIRIS-REx principal investigator at the University of Arizona, Tucson.
“I am confident that even in the face of the current challenge, this team will be successful in collecting our sample from Bennu,” Lauretta explained.
During the TAG event, OSIRIS-REx’s sampling mechanism will touch Bennu’s surface for approximately five seconds, fire a charge of pressurised nitrogen to disturb the surface and collect a sample before the spacecraft backs away.
The mission has resources onboard for three sample collection opportunities. If the spacecraft successfully collects a sufficient sample on October 20, no additional sampling attempts will be made.
The spacecraft is scheduled to depart Bennu in mid-2021 and will return the sample to Earth on September 24, 2023. (ANI)

Toll due to cyclone Amphan reaches 15 in Bangladesh

No resolution possible when sanctity of agitation gets lost; some forces want protest…

Indians trust Covid vaccine the most, 80% willing to get inoculated: Global survey

Don’t want your name on Truecaller? Follow these simple steps and unlist your phone number