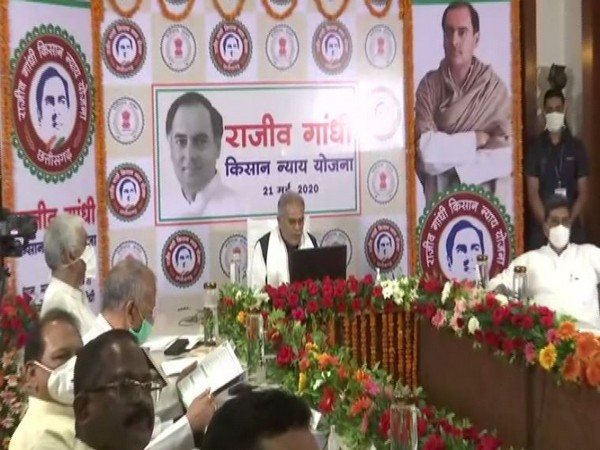 Raipur (Chhattisgarh) [India], May 21 (ANI): Chhattisgarh Chief Minister Bhupesh Baghel on Thursday launched the Rs 5,700 crore Rajiv Gandhi Kisan Nyay Yojana on the 29th death anniversary of the former Prime Minister.
Congress President Sonia Gandhi and her son and party leader Rahul Gandhi, among others, also took part in the event, through video conferencing.
Explaining the scheme, the Chhattisgarh Chief Minister said, “Chhattisgarh is probably the first state in the country to purchase paddy, maize, sugarcane at MSP and is also giving incentives to the farmers under the Rajiv Gandhi Kisan Nyay Yojana. Under this scheme, paddy and maize growing farmers will be given Rs 10,000 per acre and sugarcane farmers Rs 13,000 per acre this year. In the year 2020-21, 19 lakh sugarcane/maize/paddy farmers will be given an amount of Rs 5,700 crore.”
He said that “the first instalment of Rs 1,500 crore is being deposited directly to the accounts of farmers today. We are paying homage to respected Rajivji by doing this on the day of his death anniversary. In the coming years also, May 21 will be set for giving farmers the incentive amount.”
Earlier in the day, Rahul Gandhi paid homage to his father and former Prime Minister Rajiv Gandhi on his 29th death anniversary saying, “he is proud to be the son of a true patriot”. (ANI)