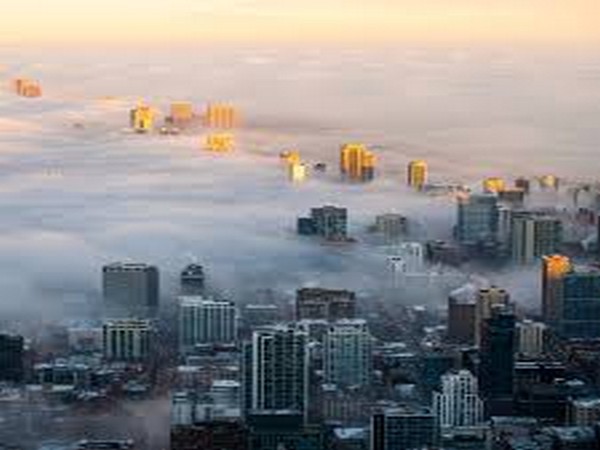 Washington DC [USA], May 20 (ANI): The momentous decline in global greenhouse gas emissions, fuelled by the wave of shutdowns and shuttered economies caused by the coronavirus pandemic, is unlikely to last long, said a group of scientists, who fear that the drivers of global warming could quickly bounce back as social distancing ends and economies rebound.
The Washington Post on Tuesday reported that as infections surged in March and April, countries across the world experienced an abrupt reduction in driving, flying and industrial output, leading to a startling decline of more than 1 billion tons of carbon dioxide emissions.
That includes a peak drop in daily emissions of 17 per cent in early April, according to the study, published in the journal Nature Climate Change. For some nations, the falloff was much steeper.
Scientists have long insisted that the world must scale back carbon pollution significantly — and quickly — to mitigate the worst effects of climate change over the coming decades.
Tuesday’s study projects that total emissions for 2020 will probably fall between 4 and 7 per cent compared with last year. The final 2020 figure will depend on how rapidly or cautiously, people around the world resume ordinary life, the scientists said.
The unprecedented situation produced by coronavirus has offered a glimpse at the massive cuts in global emissions, year after year, that would be required to meet the most ambitious goals set by world leaders when they forged the 2015 Paris climate accord.
Last fall, a United Nations report estimated that global greenhouse gas emissions must begin falling by 7.6 per cent each year beginning in 2020 to avoid the worst effects of climate change.
But the changes are unlikely to last.
“History suggests this will be a blip,” said Rob Jackson, a Stanford University professor and one of the authors of the peer-reviewed study, which attempts to assess the virus’s effect by nation and economic sector.
“The 2008 (financial) crisis decreased global emissions by 1.5 per cent for one year, and they shot back up 5 per cent in 2010. It was like it never happened,” he added.
Already, the demand for energy is resuming as people return to the roads and many US states have begun easing stay-at-home orders that helped drive the price per gallon of gasoline to less than USD 1 at some pumps.
Governments also are expected to begin trying to boost their economies with stimulus spending in the coming months. But how leaders decide to spend that money could make a fundamental difference.
Some world leaders have also pledged to push for greener economies in the wake of the pandemic.
Last week, British Prime Minister Boris Johnson said that his country’s effort to slash its emissions remains “undiminished” by the coronavirus and the economic turmoil it has caused. He singled out airlines during remarks in the Parliament, saying the sector must limit its carbon emissions even when normal flights resume.
Last month, German Chancellor Angela Merkel indicated that she would support green investments as her nation seeks to restore its economy.
Although some aspects of life may change in the wake of the pandemic — more people working remotely, fewer people commuting and taking frequent plane trips — individual changes are unlikely to make much of a long-term mark on emissions, said Zeke Hausfather, a scientist and director of climate and energy at the Breakthrough Institute.
“Unless anything structurally changes, we can expect emissions to go back to where they were before this whole thing happened,” he was quoted as saying.
Hausfather also said that one year of sharp reductions in emissions would do little to stave off the warming that scientists have said will continue unless the world significantly cuts emissions for good.
“I do not think there is much of a silver lining to COVID-19 for the climate. unless we use the recovery as a chance to both stimulate the economy and build the type of infrastructure to support a clean-energy future.” (ANI)

China’s low-key diplomats adopt aggressive attitude; ‘first step might be to wear masks and shut up’

Fraud-riddled markets disrupt supply chain of face masks in US