US President continues to defend his decision to take Hydroxychloroquine 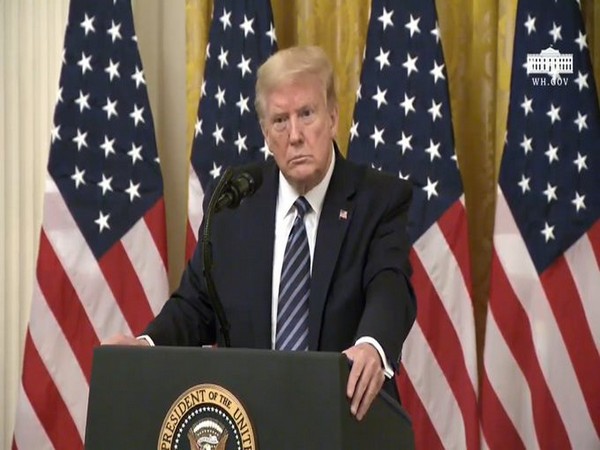 Washington D.C. [US], May 20 (ANI): US President Donald Trump on Tuesday continued to defend his decision to take hydroxychloroquine saying he believes that it gives an additional level of safety.
Responding to a question on why he continues to use the drug, that he often touted as a potential treatment for coronavirus, the US President said: “If you look at some of the reports that came out from Italy, that came out from France, that came out from other — a lot of our frontline workers take it because it possibly, and I think it does, but you know, people are going to have to make up their own mind.”
“Plus, it doesn’t hurt people. It’s been out on the market for 60 or 65 years for malaria, lupus, and other things. I think it gives you an additional level of safety,” he said.
The US President said this is an individual decision to make.
“But you can ask — many doctors are in favour of it. Many frontline workers won’t go there unless they have the hydroxy. And so, again, this is an individual decision to make. But it’s had a great reputation, and if it was somebody else other than me, people would say, “Gee, isn’t that smart?” he said.
House Speaker Nancy Pelosi on Monday criticized President Donald Trump for taking hydroxychloroquine–an anti-malarial drug which is believed to be helpful in keeping away from coronavirus infection but has not been approved by scientists, adding that he is “morbidly obese” and at risk for negative health effects.
Responding to her remarks, the US President called her ‘waste of time’.
“Well, I don’t respond to her. I think she’s a waste of time,” Trump said when asked to respond to the comment made by the House Speaker.
Later, while responding to a question about the Justice Department moving to drop its prosecution of former national security adviser Mike Flynn, Trump said: “Pelosi is a sick woman. She’s got a lot of problems, a lot of mental problems.” (ANI)