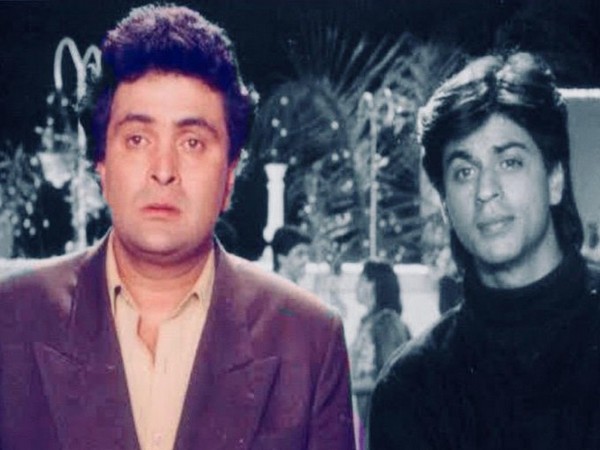 New Delhi [India], April 30 (ANI): Hours after the demise of legendary superstar Rishi Kapoor on Thursday, megastar Shah Rukh Khan penned down a heartfelt note for the departed actor.
Khan took to Twitter and posted a throwback picture featuring himself and Rishi Kapoor along with the note.
“As a young man entering the daunting world of films, I was insecure about the way I looked and afraid that I was not talented enough. The thought of failing meant nothing though, because even if I failed, I would have worked with the greatest actor I knew of – Rishi Sahib,” read the first a few lines of the note.
Sharing a memory from a film shoot with the actor, Khan wrote: “On the first day of the shoot, he sat for my scene to finish after pack up, then with that famously radiant smile on his face he said, “yaar tujhme energy bahut hai” That day in my head I became an actor.”
“A few months ago I met him and thanked him for accepting me in that movie, he had no idea how he had encouraged me,” he added.
He further went on to talk about the grace that the charismatic actor carried and how he always enjoyed the success of his loved ones.
“Few men have the capacity for grace as he did, fewer still have the large-heartedness of feeling genuine happiness for the success of others. I will miss him for many things, but more than all of them, I will miss him for his gentle pat on my head every time we met,” the ‘Jab Tak Hai Jaan’ actor said. 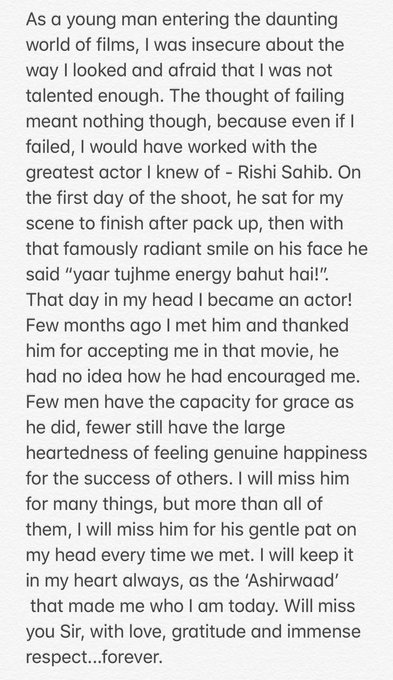 “I will keep it in my heart always, as the ‘Ashirwaad’ that made me who I am today. Will miss you, Sir, with love, gratitude and immense respect…forever,” he added.
“Heartfelt condolences to the Kapoor khandaan. May Allah give you all the strength to deal with your loss,” he tweeted along with the note.
The two superstars have worked together in several films including the hits ‘Om Shanti Om,’ ‘Jab Tak Hai Jaan,’ and ‘Deewana.’
Rishi Kapoor was admitted to Sir HN Reliance Foundation Hospital in Mumbai earlier on Wednesday.
He passed away peacefully at 8:45 am this morning after a two-year-long battle with leukaemia, his family said in a statement.
In September 2019, the veteran actor returned to Mumbai after staying in New York for almost a year for cancer treatment. (ANI)