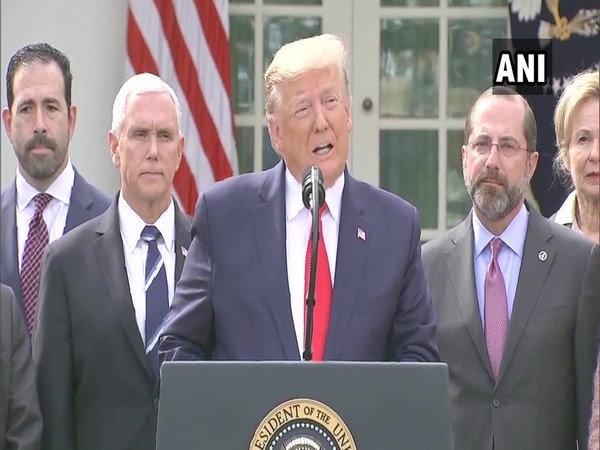 Washington DC [USA], April 11 (ANI): President Donald Trump said on Friday (local time) that choosing when to reopen the US economy amid the coronavirus outbreak would be “the biggest decision I have ever had to make.”
“I am going to have to make a decision and I only hope to God that it’s the right decision. But I would say without question, it is the biggest decision I have ever had to make,” Trump was quoted by The New York Times while briefing reporters with members of the White House taskforce.
“I want to get it open as soon as possible. This country was meant to be open and vibrant and great,” he further said on the fight against the coronavirus epidemic that has killed more than 18,000 Americans so far and put more than 16 million out of work.
With the bankers, corporate executives and industrialists plead with him to reopen the country as soon as possible, the medical experts are begging for more time to combat coronavirus.
Seizing on new estimates of a lower-than-projected death toll, the President signalled that he wanted to start resuming business on some basis after his current stay-at-home guidelines expire on April 30. He also announced that he would name a taskforce next week to develop a plan.
But he also promised to listen to public health officials cautioning against a premature move to relax limits.
However, in actuality, Trump would not make the decision on when and how to reopen the economy because he never ordered it closed. The stay-at-home edicts that have kept the vast bulk of Americans indoors were issued by governors state by state.
But the President did issue non-binding guidelines urging a pause in daily life by the end of month in view of the surging virus-related cases.
If he were to issue a new guidance saying it was safe to reopen or outlining a path toward reopening, many states would most likely follow or feel pressure from their businesses and constituents to ease up on restrictions.
“We are not doing anything until we know this country is going to be healthy,” Trump said.
“We don’t want to go back and start doing it over again,” he added.
But Trump added that the nation’s current paralysis was not sustainable. “You know what? Staying at home leads to death also. It’s very traumatic for the country,” he asserted. (ANI)