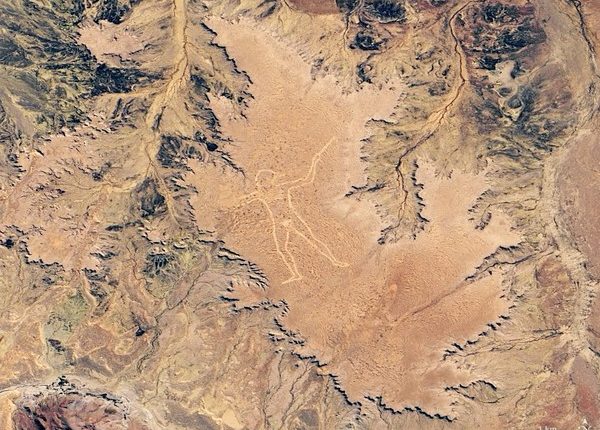 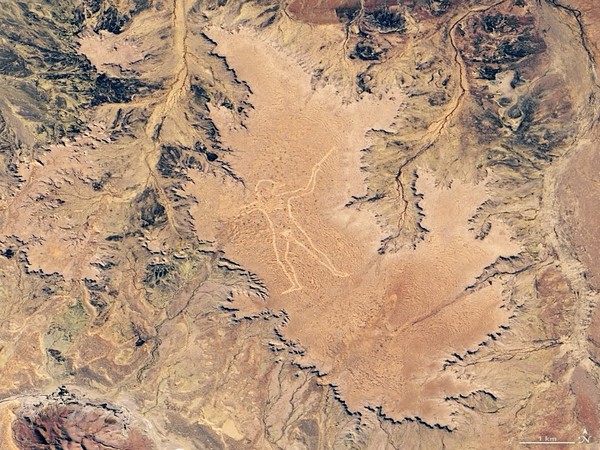 Washington D.C. [USA], Jan 2 (ANI): One of the greatest spectacles of modern art is still thriving in the Australian outback as confirmed by satellite imagery of NASA. The Marree Man is a massive geoglyph depicting an aboriginal hunter, that spans over 2.6 miles in the Southern Australian region.
Discovered by a pilot in 1998, its origin still remains a mystery even to this date.
The Marree Man was given a new lease of life in 2016 when a group of people from the neighboring town of Marree plowed its lines to avert its fading due to erosion.
After NASA shared the image of the art-work that was taken in June, the efforts of the good samaritans turned out to be a total success, reported CNN Travel.
The restoration team believes that the refurbished Marree Man would last longer than its original version.
According to NASA, “They [the team] created wind grooves, designed to trap water and encourage the growth of vegetation. They hope that eventually, the man will turn green.”
In a previous article, CNN reported that an entrepreneur by the name of Dick Smith took upon himself to unravel the geoglyph’s mystery in 2016. His team combed through all the available evidence but couldn’t find anything conclusive.
In 2018 he even offered a 5,000 Australian dollar reward for anyone who knows the identity of its creator.
Nobody turned up with an answer but it was speculated that unknown artist lives in Alice Springs or even might be an American. (ANI)

‘The Last Duel’ movie review: Then is now in period Me Too drama

Watch: Young boy wants Pope Francis’s skull cap, manages to get one like it for…

Fuel prices on a roll, hiked again by 35 paise/litre

PM Narendra Modi to address the nation at 10 am

Indo-US relationship based on trust which is increasing: India’s envoy

Congress has damaged its interests by not trusting me, says Amarinder Singh

Why are the expectations of a vaccine so high?And why is it so expensive to develop a…

‘The Last Duel’ movie review: Then is now in period Me Too drama

Watch: Young boy wants Pope Francis’s skull cap, manages to get one like it for himself

Weather likely to improve in J&K