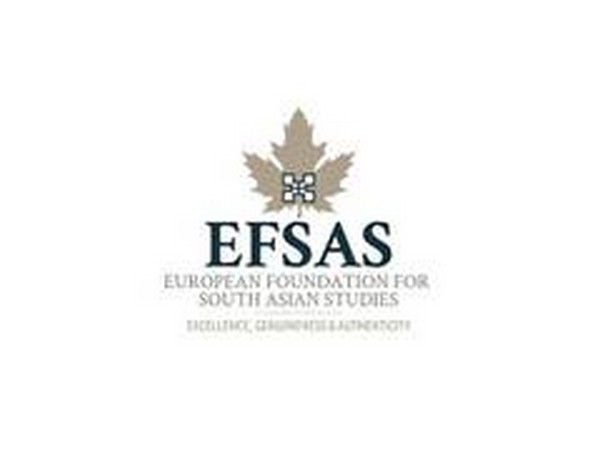 Amsterdam [Netherlands], April 11 (ANI): The arrest of Abdullah Orakzai alias Aslam Farooqi, a key leader of the Islamic State in Khorasan Province (ISKP) has brought the terror group’s Pakistani connections into sharp focus, a European think-tank has said.
In a commentary titled ‘Pakistan’s role in the Kabul gurdwara attack has been established and its mounting despondency is becoming starkly evident’, the European Foundation For South Asian Studies (EFSAS) said that the recent arrests by Afghan security forces related to the terror attack on a gurudwara in Kabul last month, have confirmed its assessment of the involvement of ISI — Pakistan’s intelligence agency known for supporting terrorism.
“It had been postulated that the choice of target, the historical fact of Pakistan being behind all other major attacks over the years against Indian interests in Afghanistan and the claim by the perpetrators that the attack was aimed at avenging Indian actions in Kashmir. All left little doubt that it was the Pakistani Inter-Services Intelligence (ISI) that had orchestrated the attack and had used its terrorist proxies, the Haqqani network and the Lashkar-e-Taiba (LeT), to do the dirty work on its behalf,” the EFSAS said in its commentary.
It cited a statement by National Directorate of Security (NDS), the Afghan intelligence service, which disclosed that Farooqi enjoyed “close relations” with Pakistan-based and backed terrorist groups such as the Haqqani network and the Lashkar-e-Taiba (LeT) and he had confessed to having links with “regional intelligence agencies”, which the think-tank termed as “a euphemism for the ISI.”
Highlighting that ISI has been finding it increasingly difficult to find any traction in Kashmir in recent months and has been faced with multiple reverses vis-a-vis its terrorist assets, the EFSAS said, “The frustrating thing for the ISI is that its expectation that the Indian government’s August 5, 2019 moves would result in a groundswell of extremism with Kashmiri youth taking up arms en masse and joining the ISI’s violent campaign of jihad have been belied.”
The Pakistani intelligence agency is also “smarting at being unable to carry out any terrorist attack of substance in Kashmir over the last nine months” even as about 50 terrorists have been killed there by Indian security forces in the last three months alone.
“The desperation that this has bred in the ISI ranks became evident on 5 April, when the ISI attempted to infiltrate five terrorists under extremely challenging circumstances and lost all five,” the commentary said.
“On the back foot in Jammu and Kashmir and emboldened by the prospect of the imminent return of the Taliban, whom it created and has nurtured for decades, at the helm in Afghanistan, the ISI appears to be setting up to turn Afghanistan into an alternate and more conducive arena to target Indian interests,” it stated.
“Reports indicate that some of the ISI’s Kashmir-centric terrorist assets have begun bolstering their presence in Afghanistan. The LeT had initially been formed in Kunar province of Afghanistan and it has continued to maintain a presence there. Reports suggest that it is now in expansion mode in Kunar as well as the adjacent Nangarhar province,” EFSAS said.
The Jaish-e-Mohammad (JeM), meanwhile, has reportedly recently appointed commanders for as many as 12 Afghan provinces, including Kunar, Nangarhar, Paktia, Parwan, Kunduz, Ghazni, Nimroz, Helmand, Kandahar and Uruzgan.
EFSAS believes that the ISI’s aim appears to be two-fold.
“Its main Kashmir-centric terrorist proxies such as the LeT and the JeM and their leaders and members have also been in the glare of the international spotlight. The ISI, in response, has been trying hard to divert attention from its terrorist proxies by indulging in cosmetic arrests and farcical disappearances of the leaders of these outfits,” the think-tank said.
The ISI, it stressed, seems to believe that relocating some of the leaders and members of these terrorist groups to Afghanistan, where myriad terrorists of all hues pre-exist, would make it easier for its assets to slip under the radar.
“The ISI also appears to believe that with Jammu and Kashmir having become much more impregnable in recent months, it may be worth the while to focus a part of its energies on targeting Indian interests in Afghanistan,” the commentary underlined.
The think-tank also advised India to put in place a robust mechanism to protect its interests in Afghanistan.
“Jammu and Kashmir has historically been, continues to be, and will remain, at least in the foreseeable future, the most important issue for Pakistan. Next in priority for the Pakistani military establishment would, arguably, be getting India out of Afghanistan, or at the very least reducing its influence there… India would do good to put in place a robust mechanism to protect its interests in Afghanistan,” EFSAS stressed.
“International pressure to force Pakistan to desist from pursuing its nefarious designs in Afghanistan, a course of action that will only serve to further vitiate and destabilise the already highly fragile situation in a country, in which the international community has invested a lot of time, resources and blood, must constitute an integral component of such a mechanism,” it further said. (ANI)

Bengal’s unemployment rate at 6.5 pc, ‘far better’ than that of…