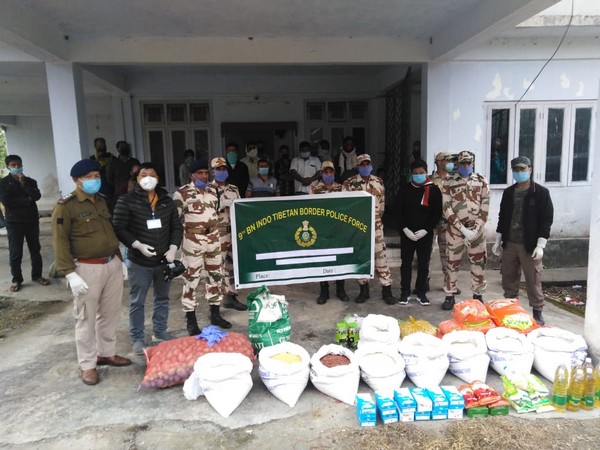 New Delhi [India], April 9 (ANI): Indo-Tibetan Border Police (ITBP) Troops are reaching out to people living in far flung areas to provide and facilitate distribution of essential items across the country. The force has been asked keep good care of people who are living in areas where there is hardly any communication.
Areas in Leh, Himachal Pradesh, Uttrakhand and villages situated at Himalayan range are getting adequate supply of essential items.
“The Jawans of Indo-Tibetan Border Police (ITBP) are providing ration, fuel, medicines besides other daily use items in different parts of the Country during the lock down. They are also helping authorities in enforcement of the lockdown and keeping an eye on the supplies being provided to the needy. Remote border villages of Ladakh, Himachal Pradesh, Uttarakhand, Sikkim, and Arunachal Pradesh and parts of Chhattisgarh where the Force is deployed have been focused specially by the Force besides other parts of the nation such as Patna, Ludhiana, Jalandhar to name a few,” ITBP, Spokesperson Vivek Pandey said.
According to ITBP Migrant laborers, villagers are provided ration and other items free of cost. The concerned administrations are also provided help aiding them to reach to the remotest parts of Himalayas.
“Thousands of people are benefited with the gesture. The Force is also running awareness campaigns in the areas and keeping social distancing in mind, providing correct information to the people of these areas,” ITBP says. ITBP troops have distributed essential items to locals in remote Thangi village, Kinnaur in Himachal Pradesh, have ration items to the BPL families of border villages and stranded labourers in Uttarakhand and Himachal Pradesh.
Not only in Northern India but ITBP has also helped people in Northeast India. (ANI)

Telangana govt orders demarcation of graveyards for those who die of suspected, confirmed COVID-19 cases