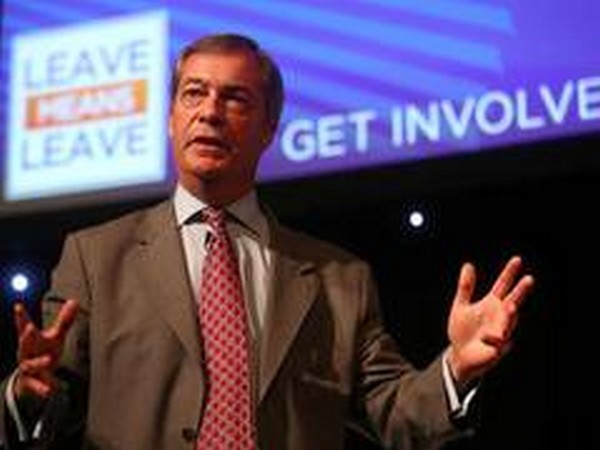 London [UK], April 8 (ANI): Brexit Party leader Nigel Farage has expressed concern over United Kingdom accepting China’s ventilators, saying that the aid from Beijing will eventually lead to the country’s involvement in 5G network in the UK.
Farage’s remarks came days after the UK government confirmed that 300 ventilators have arrived in the country from China to be used for COVID-19 patients.
“Sure we want ventilators from everywhere…but the price is having China still in our 5G network when we accept donations from the country”, Leading Britain’s Conversation (LBC) quoted Farage as saying.
He believed that our dealings with China would “damage relations with our allies” and lead to the UK distancing itself from the US and Europe.
He further said that China is not the UK’s friend.
“We are much too dependant on China,” Nigel warned. He cited rights abuses by China, such as reeducation camps, to make the point that the UK cannot be associated too closely with the country.
Ventilators are the most important tool in helping those affected by a coronavirus. Britain which is witnessing the continuous surge to coronavirus has admitted that it does not have enough ventilators. The UK has reported 55,242 coronavirus cases and 6159 death from the deadly virus.
Farage is not the only one to express these concerns, many experts also are of the same view.
David Shullman, Senior Advisor to International Republican Institute, wrote in ‘War on the Rocks’ that Chinese leaders are all to translate their manipulation of the global narrative and provision of medical equipment to countries hit hard by COVID-19 to their concrete benefit like integrate Huawei equipment in their 5G infrastructure.
“Deliveries of ventilators, masks and virus test kits — many of which might not work properly — may come packaged with pressure on countries that have been reluctant to adopt China’s terms or integrate Huawei equipment in their 5G infrastructure,” Shullman wrote.
Countries around the world are concerned that China’s ruling Communist Party could pressure Huawei into installing backdoors into its products that would allow it to spy on traffic that’s passing through its networks. (ANI)