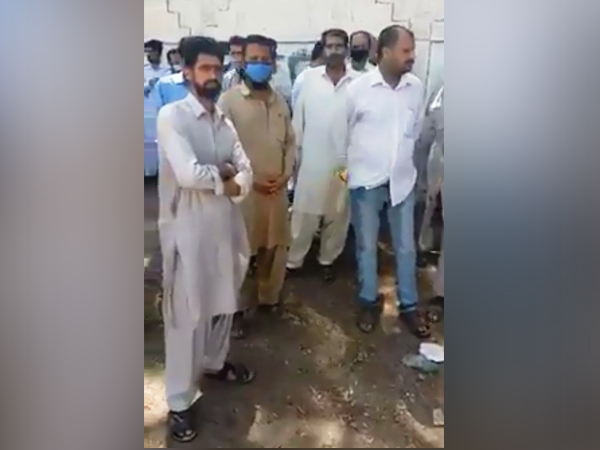 Karachi [Pakistan], Apr 6 (ANI): Thousands of migrant workers from Pakistan-occupied Kashmir (PoK) including daily wagers, factory workers and labourers are stuck in the Karachi city of Pakistan’s Sindh province due to Coronavirus lock-down.
The workers hail from far-flung areas of PoK such as Niyal, Kotli, Neelum, Muzaffarabad, Mirpur and Gilgit, sources revealed.
“They have no food rations neither any arrangements have been made for their emergency accommodation while they remain jobless and homeless”, said a political activist, who posted a video of the affected people on social media.
He has criticised the Muzaffarabad government headed by so-called Prime Minister Raja Farooq Haider for failing to attend to the needs of PoK migrant workers and demanded that the government of PoK enters into negotiations with the government of Sindh to provide them with food rations, temporary free accommodation, and screening for Coronavirus.
“I fear that Coronavirus might spread on a large scale among PoK migrant workers since they have not been maintaining policies such as social distancing and cleanliness,” Dr Amjad Mirza, a PoK activist, told ANI.
“The issues faced by the PoK migrant workers in Karachi must be addressed on war footing”, he added.
The number of the coronavirus cases in Pakistan on Monday reached 3,277 with the infections in the worst-hit Punjab province approaching 1,500 despite government claims that the ongoing lockdown in the country has slowed down the spread of the deadly virus.
Ministry of National Health Services said that 50 patients have so far died of the disease, while 257 people have recovered.
Punjab recorded 1,493 cases, Sindh 881, Khyber-Pakhtunkhwa 405, Gilgit-Baltistan (GB) 210, Balochistan 191, Islamabad 82 and Pakistan-occupied Kashmir 15. (ANI)

Journalists protest against police barbarity in Gilgit amid COVID-19 outbreak

Himachal Pradesh to cut salaries of Ministers, MLAs by 30 pc for one year