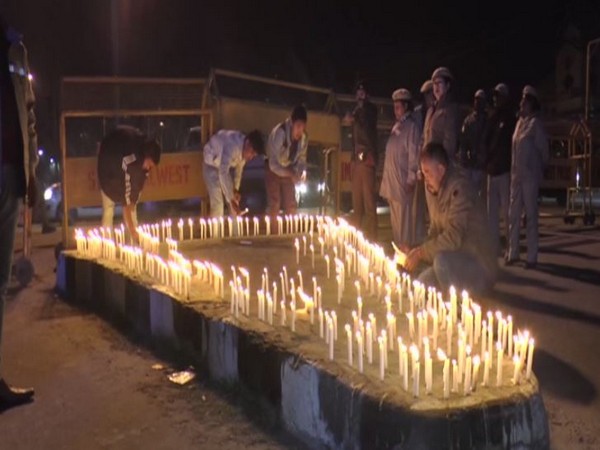 Imphal (Manipur) [India], Dec 14 (ANI): Extending solidarity to the people of Assam, Tripura and Meghalaya, who have been vehemently protesting against the Citizenship (Amendment) Act (CAA), 2019, Manipur People Against Citizenship (Amendment) Bill (MANPAC) held a candlelight protest cum vigil at the western gate of Kangla here on Friday evening.
A large number of people gathered to pray for those who died during the protests and for those who suffered injuries, particularly in Assam.
After MANPAC announced the candlelight vigil, police barricaded and cordoned off the area and tried to prevent the public from holding a protest.
After some verbal row with the representatives of civil bodies, the police allowed people to enter the area where the vigil was being held in small groups. After lighting candles, 12 women representing various civil bodies walked up to the Kangla gate and offered prayers to the deities in Kangla for peace to prevail in the region.
Yumnamcha Dilipkumar, MANPAC convenor, told media: “The candlelight vigil was organised to express condolence over the demise of three protestors. We also extend solidarity to their movement against the controversial Act.”
Adding that MANPAC is ready to extend any form of support and cooperation to the people of the North-East protesting against the Act, he said: “The demand of MANPAC has been to exempt the entire North-East region from the purview of the contentious legislation. We have not achieved our goal so we will continue with our agitations until the entire North-East is exempted from the legislation.”
Dilipkumar further said, “The review meeting, which was scheduled earlier, will be held on Saturday to deliberate on the further course of action with the extension of Inner Line Permit System (ILPS) in the state.”
He also urged the government to make necessary arrangements and procedures for implementation of ILPS in Manipur.
The Citizenship (Amendment) Act, 2019, seeks to grant Indian citizenship to refugees from Hindu, Christian, Sikh, Buddhist and Zoroastrian communities fleeing religious persecution from Pakistan, Afghanistan, and Bangladesh and who entered India on or before December 31, 2014. (ANI)

Jurgen Klopp feels clash against Arsenal will be different, interesting

Indian Railways gears up to become “Green Railway” by 2030