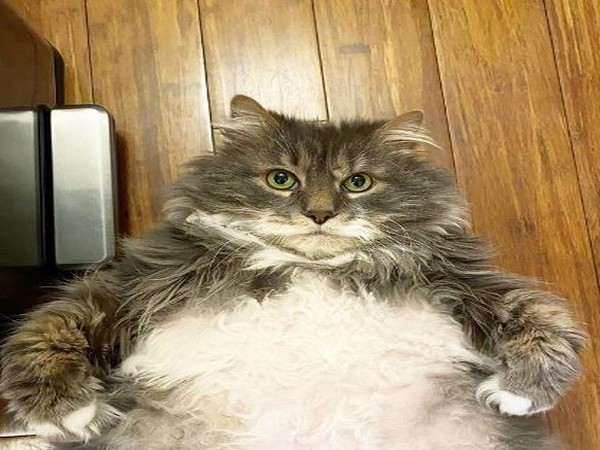 Virginia [USA], Feb 13 (ANI): Animal lovers on the internet are going gaga over a morbidly obese cat who is waiting to be adopted by a loving family.
According to Fox News, Wilford the cat from Virginia, USA tips the scale at 28 pounds, which officially puts him in the obese category.
The hefty feline who was surrendered to animal rescue workers is currently being taken care of by a foster family that is striving to get him in shape and also placed in a suitable home.
Fox News cited DCist which reported that Wilford was handed over to Lost Dog and Cat Rescue which is based in Virginia.
Wilford’s foster mother told People magazine that “while it’s easy to jump to conclusions about what someone may have done wrong for him, I encourage people to look at the situation with empathy.”
“Wilford is amazing, and while he definitely requires specialized care, I can’t imagine it was easy for his family to let him go. Rather than focus on how he got like this, I like to focus on the fact that his people asked for help when they needed it and that he’s now on a path towards a healthier life,” she further told People.
The cat’s present guardians feel that he is “incredibly affectionate and loves being doted on by humans. He’s used to be being pet and was clearly very spoiled.”
The fosters run an Instagram page named Playschool for Wayward Kittens that is followed by more than 100,000 people.
Right now it is quite apparent that Willford has become the absolute favourite among the followers of this page as his pictures and videos continue to get showered with thousands of likes and positive comments. (ANI)

Atalanta ‘special’, playing against them is difficult: Thomas Tuchel ahead of Champions League clash

Kylian Mbappe will be in squad if ‘everything goes well’: Tuchel ahead of Champions League clash

After being unsuccessful in Rajasthan, BJP wants to dislodge Thackeray govt: Shiv Sena

CPI-M says can’t depend on Trinamool to fight BJP

Kerala CM lashes out at disrespect shown towards politicians