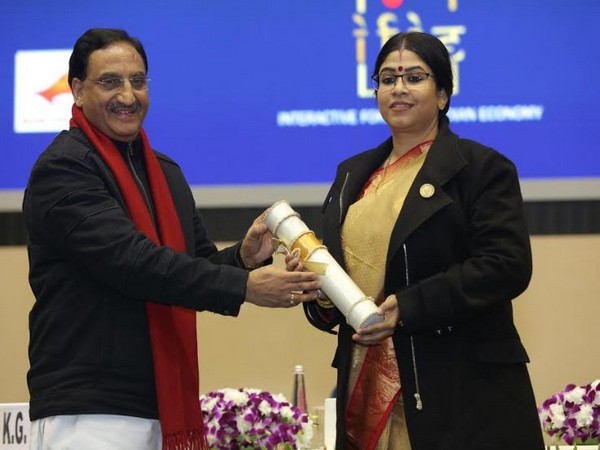 Kolkata (West Bengal) [India] Feb 13 (ANI/NewsVoir): Kolkata-born renowned astrologer Dr Sohini Sastri, has been graced with prestigious Indian Achievers Award, wherein she was adjudged the Best Astrologer of the Year.
The award was presented to Dr Sohini Sastri by Union HRD Minister, Dr Ramesh Pokhriyal, in a special ceremony conducted at Vigyan Bhawan in New Delhi.
The Indian Achievers Awards are aimed at identifying significant personalities for the year 2020. Several other luminaries were also present during the award ceremony including Murli Manohar Joshi (Senior BJP Leader); Anurag Thakur (MoS Finance & Corporate Affairs); Shyam Jaju (National Vice President, BJP); Acharya Balakrishnan (Acharya Mahamandaleshwar, Juna Akhara); Bhaichung Bhutia (famous Indian footballer), and Bollywood actors Shilpa Shetty Kundra; Suresh Oberoi and Mukesh Rishi to name a few.
“I am humbled to win the Best Astrologer of the Year award. Receiving the award from a distinguished personality like Dr Ramesh Pokhriyal is such an honour. I sincerely wish to help as many people possible with the ancient science that astrology is, and transform their lives for a better and prosperous future”, said Dr Sohini Sastri.
Dr Sohini Sastri is an internationally acclaimed Astrologer by profession. She has won various national and international awards for her professional and social initiatives on society.
She received the prestigious “Champions of Change” award from former President, Dr Pranab Mukherjee, “Pride of the Nation” award from the Defence Minister of India, Rajnath Singh and the “Brilliance Award” from the Governor of Uttarakhand, Baby Rani Maurya.
The Indian Achievers Awards celebrate in the achievers not the magnitude of their success but the intensity of the efforts they have put into their work.
The winners are honoured for their spirit, for their nerve to soldier on despite odds, for making their dreams real, for their commitment to the society. To win an Indian Achievers Award, size does not matter; spunk does.
This story is provided by NewsVoir. ANI will not be responsible in any way for the content of this article. (ANI/NewsVoir)

Milap Zaveri: For me, cinema is escape