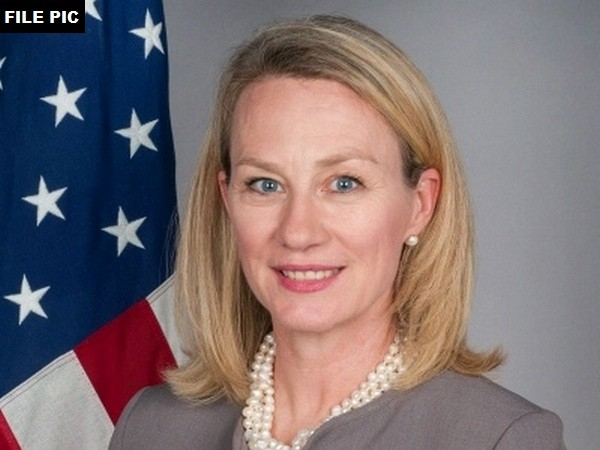 Washington D.C [US], Feb 13 (ANI): Alice Wells, Principal Deputy Assistant Secretary of US for South and Central Asian Affairs on Wednesday (local time) termed the conviction of 26/11 Mumbai terror attack mastermind Hafiz Saeed as an “important step forward” towards holding terrorist organisation LeT “accountable for its crimes”.
“Today’s conviction of Hafiz Saeed and his associate is an important step forward – both toward holding LeT accountable for its crimes, and for #Pakistan in meeting its international commitments to combat terrorist financing,” she tweeted.
“And as @ImranKhanPTI has said, it is in the interest of #Pakistan’s future that it not allow non-state actors to operate from its soil,” she said in another tweet.
An anti-terrorism court in Lahore, Pakistan on Wednesday sentenced Mumbai terror attack mastermind and chief of the banned Jamaatud Dawa (JuD) Hafiz Saeed to five-and-a-half years in prison each in two terror financing cases.
Dawn reported that he was slapped with a prison sentence of five-and-a-half years and a fine of Rs15,000 in each case and the sentences of both cases will run concurrently.
Special Anti-Terrorism Court Judge Arshad Hussain Bhatta announced the reserved verdict.
On Tuesday, the court had accepted a plea of Saeed to club all six terror financing cases against him and his associates and announce the verdict on completion of the trial.
The court had indicted the JuD chief and three of his associates – Hafiz Abdul Salam bin Mohammad, Mohammad Ashraf and Professor Zafar Iqbal – on terror financing charges on December 11 last year in a case filed by the Counter-Terrorism Department (CTD).
Saeed and Iqbal were later indicted in a similar case on December 20. The cases were filed by CTD Lahore and Gujranwala chapters.
The ATC on Saturday last week had deferred announcing its verdict in the terror financing cases and decided to hear arguments on February 11 on the suspects application to hear all cases first before reserving its judgment.
On July 3 last year, 13 top leaders of the banned outfit, including its chief Saeed and Naib Emir Abdul Rehman Makki, were booked in nearly two dozen cases of terror financing and money laundering under the Anti-Terrorism Act, 1997.
Saeed was later arrested by the CTD on July 17 while he was travelling between Gujranwala and Lahore.
Saeed is nominated in 29 cases pertaining to alleged terror financing, money laundering as well as illegal land grabbing. During the trial of both cases, the court recorded the statements of 23 witnesses.
The crackdown on JuD last year followed a warning by the Paris-based Financial Action Task Force (FATF) to Pakistan to deliver on its commitments to curb terror financing and money laundering.
The government had announced a ban on JuD and Falah-e-Insanyat Foundation (FIF) to partially address the concerns raised by India that Pakistan supported these and six similar organisations, including Jaish-e-Mohammad (JeM) or at least considered them low-risk entities.
The law enforcement agencies over the next few weeks had intensified their crackdown on JeM, JuD, FIF and other banned outfits, and arrested more than 100 activists. Nearly 200 seminaries besides hundreds of other facilities and assets associated with them across the country were taken over by the government. (ANI)

How much do Sunburn promoters owe Goa exchequer, asks HC

Jayalalithaa will face voters on Saturday