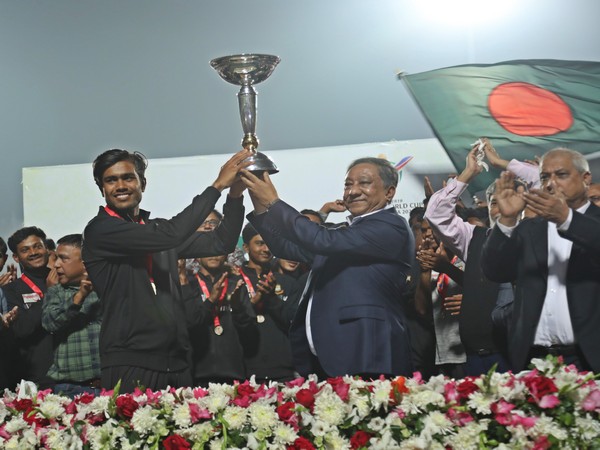 Dhaka [Bangladesh], Feb 13 (ANI): After lifting their maiden U19 World Cup title, the Bangladesh team received a heroes’ welcome back home as people in the country took to the streets to cheer for the trophy-winning squad.
Bangladesh defeated India by three wickets in the finals on Sunday to lift their maiden U19 title.
Bangladesh Cricket Board’s official handle posted photos on Twitter and captioned the post as: “Snaps from Bangladesh U-19 team’s reception at Bangladesh Cricket Board (BCB) at Sher-e-Bangla National Cricket Stadium after their arrival at home”. 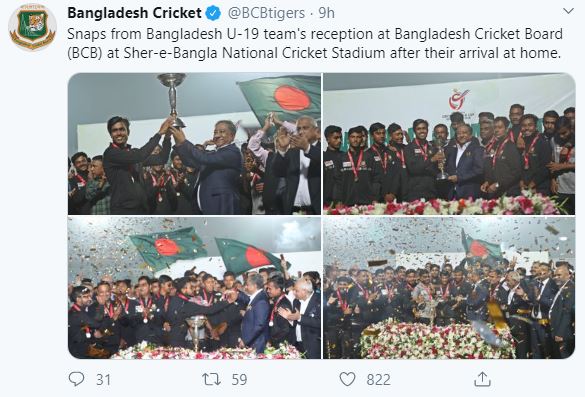 Nazmul Hassan, the president of the BCB, welcomed the side at the Hazrat Shahjalal International Airport.
The U19 final saw some high voltage action as players from both sides played the match with high intensity.
From the start, India and Bangladesh players were not willing to give an inch.
After the conclusion of the final, players from both sides got into a scuffle. This prompted Indian skipper Priyam Garg to term Bangladesh’s actions as ‘dirty’ while the Bangladesh captain Akbar Ali apologised for his team’s antics after the match.
The ICC also took note of the matter and reprimanded five players. Out of these five, three are from Bangladesh while two are Indians. (ANI)

We are one of the favourites to lift Women’s T20 World Cup: India coach WV Raman

COVID-19: Arrangements made for supply of seeds and fertilisers to farmers in…

Borders with Delhi will be opened after discussion with Kejriwal govt, says Haryana…

Hope these first showers only bring joy, not drama: Vicky Kaushal as he shares picture of cloudy sky