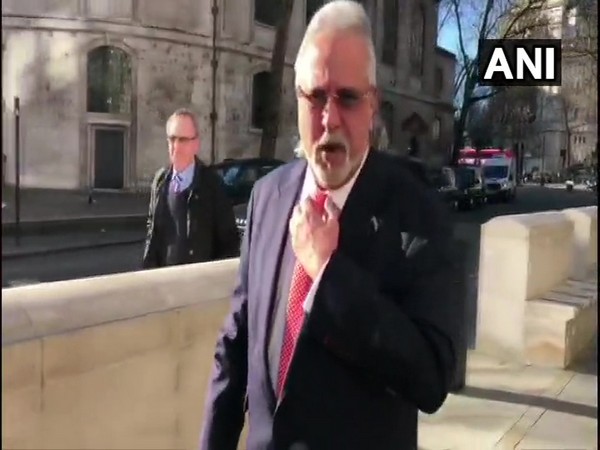 London [UK], Feb 12 (ANI): Fugitive liquor baron Vijay Mallya returned to the courtroom here on Wednesday, the second day of hearing at the UK High Court, where the former billionaire has appealed against the extradition decision of Westminster Magistrates Court in December 2018.
On being asked about his expectations from the lengthy appeals process against the extradition order as today is the last day for Mallya to present his defence, the embattled former Kingfisher Airlines boss replied, “I have no clue. You see. I’ll also see it. Let’s not get into a speculative game.”
When asked on what would happen if Mallya loses the case and has to return to India, the liquor baron responded: “We do have arguments.”
The UK High Court, on Tuesday, had also heard Mallya’s appeal against the Westminster Magistrates’ Court order extraditing him to India to face alleged fraud and money laundering charges amounting to Rs 9,000 crore.
Mallya was present in the court along with his counsel Clare Montgomery during the hearing. Officials from Enforcement Directorate (ED) and Central Bureau of Investigation (CBI) along with counsel Mark Summers representing the Indian government were also present.
When the judge asked if there was a timeline in the case, Clare said,” This is a very dense case,” involving multiple individuals and organisations and that not everything had been taken into account by the magistrate Emma Arbuthnot in her ruling against Mallya.
Montgomery contended that the magistrate’s ruling had been riddled with “multiple errors”. She also brought into question the admissibility of documents submitted by the Indian government – including witness statements and emails that proved crucial in the ruling by judge Arbuthnot, who found “clear evidence of misapplication of loan funds” and that there was a prima facie case of fraud against Mallya.
As she had done throughout the trial, Montgomery continued to assert that Mallya had not acted in a fraudulent manner or run a pyramid and that the collapse of Kingfisher Airlines was, in fact, the failure of a business in difficult economic circumstances.
She also reiterated concerns about the conduct of the Central Bureau of Investigation (CBI) in bringing charges against Mallya, claiming that the tycoon had been made a scapegoat.
Montgomery also stated that the Indian government had presented the loan taken out by Kingfisher Airlines, not as a simple business loan but was part of a larger and elaborate attempt at defrauding the banks by Mallya and Kingfisher Airlines management.
This, Montgomery contended, was but one example of a wider misinterpretation of the case by judge Arbuthnot.
The High Court justices reprimanded Montgomery for concentrating on the evidence – in essence rehashing the case presented at the lower court – rather than the apparent “mistakes” made by judge Arbuthnot in her ruling.
Mallya remains on bail of £650,000 as he has done throughout this legal process.
The Crown Prosecution Service which is representing the Government of India will present its case for the extradition of Mallya on Wednesday.
The 63-year-old businessman fled India in March 2016 and has been living in the UK since then. (ANI)

Having kids or not, life satisfaction remain same