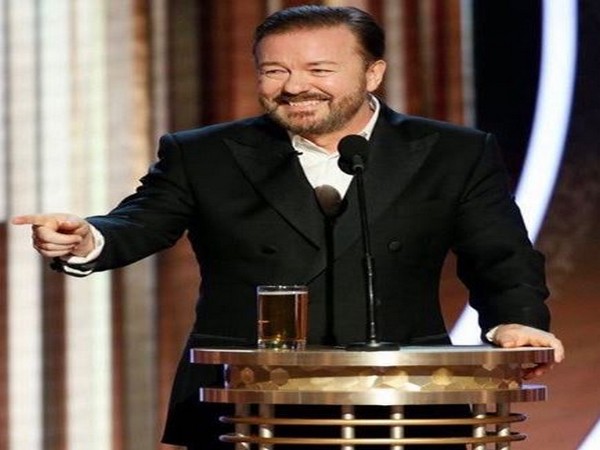 Washington D.C. [USA], Feb 11 (ANI): Standup comedian Ricky Gervais recently blasted the Oscar awardees for their politically charged and ideologically opinionated acceptance speeches.
According to Fox News, Gervais was showered with appreciation for his no holds barred monologue at the Golden Globes where he roasted the A-list celebrities for hypocritically sermonising the common people.
In his monologue, the comedian had said: “If you do win an award tonight, don’t use it as a platform to make a political speech. You’re in no position to lecture the public about anything. You know nothing about the real world. Most of you spent less time in school than Greta Thunberg,” Gervais told the crowd of A-listers. “So if you win, come up, accept your award, thank your agent, thank your God, and **** off.”
His warning, however, went completely unheard by the Oscar-winning heavyweights who didn’t shy away from talking about topics such as health care, climate change, and Trump’s impeachment, reported Fox News. 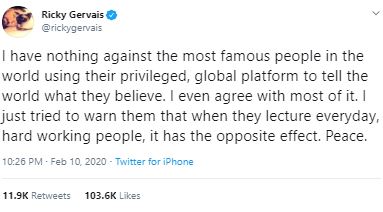 Gervais voiced his objection on Twitter on Monday (local time), in which he wrote: “I have nothing against the most famous people in the world using their privileged, global platform to tell the world what they believe. I even agree with most of it. I just tried to warn them that when they lecture every day, hard-working people, it has the opposite effect. Peace.,”
Fox News quoted The Hollywood Reported, according to which this year’s Oscars witnessed the lowest viewer count in its history, which stood at a measly 23.6 million, 7.7 million less than last year.
Brad Pitt was one of the celebrities who gave their speeches a political twist. Commenting on the issue of Trump’s impeachment, he said: “They told me I only have 45 seconds up here, which is 45 seconds more than the Senate gave John Bolton this week…..I’m thinking maybe Quentin [Tarantino] does a movie about it. In the end, the adults do the right thing.”
Joaquin Phoenix, who bagged the best actor award for the movie ‘Joker’, gave a lecture upon the state of humanity and the suffering of cows.
According to Fox News, he said: “We feel entitled to artificially inseminate a cow…….And when she gives birth, we steal her baby even though her cries of anguish are unmistakable and then we take her milk that’s intended for her calf and we put it in our coffee and our cereal.” (ANI)