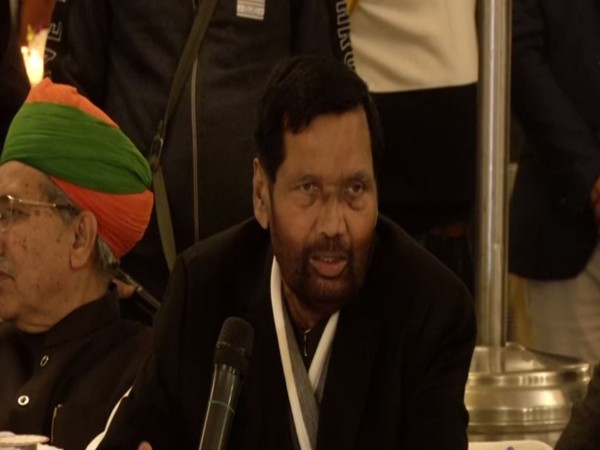 New Delhi [India], Feb 11 (ANI): Union Minister Ram Vilas Paswan on Monday said that reservation will be there till the caste system exists in the country.
“Reservation will be there till the caste system exists,” said Paswan said at a meeting of SC/ST MPs at his residence.
Recently, in a landmark judgment, the Supreme Court said that reservation in promotions for government jobs is not a fundamental right. The top court also said the states cannot be directed to provide promotions to the members of the SC/ST community.
However, he welcomed the Supreme Court verdict which upheld the constitutional validity of SC/ST (Prevention of atrocities) Amendment Act, 2018.
“We welcome one of the SC verdicts which upheld SC/ST (Prevention of atrocities) Amendment Act, 2018. When the Act was envisioned in 1989, there were provisions to punish those who violated the SC/ST (Prevention of Atrocities) Act. There were deliberations on the improvement of the Act and suggestions were given to the Prime Minister about it. The government passed an amendment to the Act in 2018 and the verdict on the matter by the SC has endorsed the amendment,” said Paswan.
The Supreme Court on Monday upheld the constitutional validity of Scheduled Castes and Scheduled Tribes (Prevention of Atrocities) Amendment Act, 2018 that ruled out any provision for anticipatory bail for a person accused of atrocities against Scheduled Castes/Scheduled Tribes.
“There is no fundamental right which inheres in an individual to claim reservation in promotions. No mandamus can be issued by the court directing the State government to provide reservations,” the apex court said in its verdict on February 7. (ANI)

On this day in 2010: Suresh Raina became first Indian to…