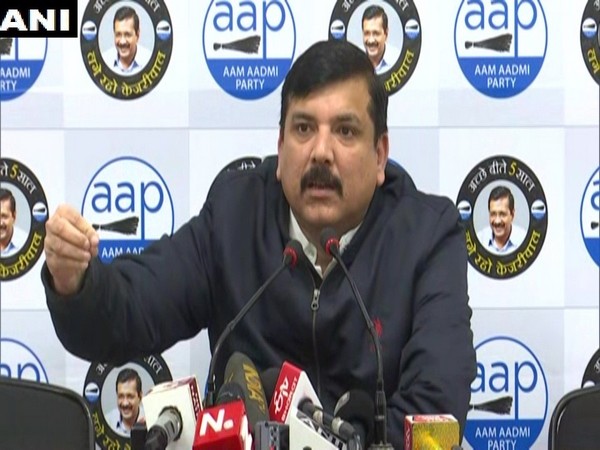 New Delhi [India], Feb 9 (ANI): Aam Aadmi Party (AAP) on Sunday slammed the Election Commission for not revealing the Delhi Assembly polls voter turnout percentage for the first time in the last 70 years and alleged some ‘conspiracy’ is being played.
“Delhi elections were held yesterday. It is for the first time in the 70 years of Indian history that the Election Commission is not willing to tell voter turnout percentage even after 24 hours of polling. It means “Kahin kuch daal mei kaala hai, koi khel chal rha hai ander hi ander,” (something is wrong and a hidden game or conspiracy is being played),” said AAP leader Sanjay Singh in a press conference here.
Cornering BJP, the AAP leader accused the party with tampering of Electronic Voting Machines (EVMs) .
“How did B L Santosh (BJP leader) knew that 17 per cent of the votes were cast in the last 2 hours and votes were given to BJP. Also, why Manoj Tiwari (BJP Delhi Chief) claiming that his party will come into power with over 48 seats and asking people to not cry after EVMs,” he said.
Responding to Congress leader KTS Tulsi’s statement over favouring AAP in Delhi polls to keep BJP out of power, he said: “Earlier, the Congressmen were saying that the Congress party is going to form the government in Delhi. Now, they are saying that they did not contest elections for AAP. Only the people of Delhi will tell what is the truth.”
“AAP has contested on the issue of development and our party is going to form the government again,” he said.
Counting of votes for 70 Assembly seats in Delhi will take place on February 11. (ANI)

Citizenship of all Indians is safe, says Union Minister Naqvi

Brazil beefs up security ahead of World Cup draw

Love gets toxic for Shahid in ‘Kabir Singh’…

Above 30 tennis players growing in stature (Special to IANS)