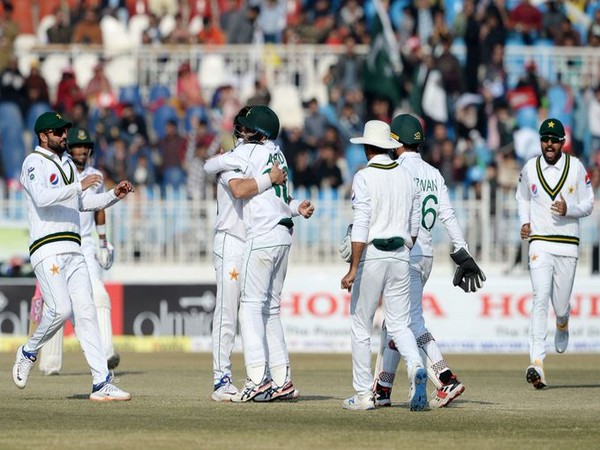 Rawalpindi [Pakistan], Feb 9 (ANI): Naseem Shah’s hat-trick put Pakistan in the dominating position in the first Test against Bangladesh at Rawalpindi Cricket Stadium here on Sunday.
Bangladesh are trailing by 86 runs with four wickets in hand. They were at 126/6 in 45 overs at the stumps on day three. The play was called off early due to bad lights. Skipper Miminul Haque and Liton Das are unbeaten on the crease at 37 and 0 respectively.
Shah achieved the feat, playing in his fourth Test, against Bangladesh on the third day of the first Test at Rawalpindi Cricket Stadium.
The 16-year-old Shah dismissed Najmul Hossain Shanto (37), Taijul Islam (0), and Mahmudullah (0) in the successive deliveries. He became the first bowler to scalp hat-trick for Pakistan in Tests since Mohammad Sami achieved the feat against Sri Lanka in 2002.
In December, Shah became the youngest fast bowler to take a five-wicket haul in Tests. Shah returned with the figure of 4-26 in his 8.2 overs. His spell put the hosts in a dominating position. At the end of play on day three, Bangladesh were at 126/6, trailing by 86 runs.
Earlier, Pakistan were bundled out by the visitors on 445. Shan Masood and Babar Azam scored centuries. Asad Shafiq and Haris Sohail also scored fifty-plus scores to guide their side to a massive total.
For Bangladesh, Abu Jayed and Rubel Hossain both clinched three wickets each. (ANI)

Nitish Kumar favours dialogue between the Centre and agitating farmers

Welcome to Goa, but don’t urinate on roads: Parrikar