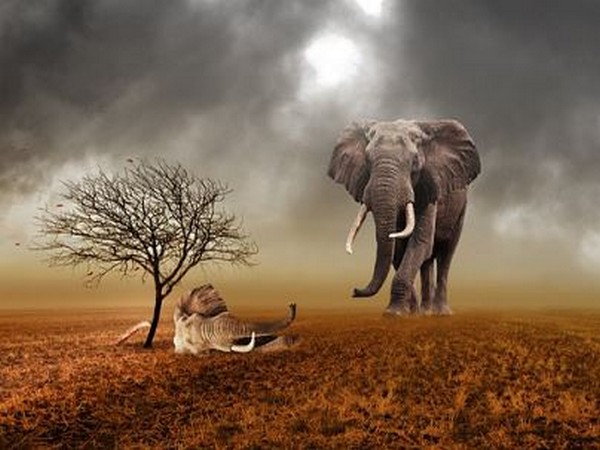 Washington D.C. [USA], Feb 7 (ANI): A recent review of documented field observations of elephants near the carcasses of individuals of their own species has revealed their generalized interest in their dead, even after bodies have long decayed.
Such a proclivity for interacting with the corpses was seen even among elephants that were not closely bonded to their deceased peer.
Stories of unique and sentient interactions between elephants and their dead are a familiar part of the species’ lore, but a comprehensive study of these interactions has been lacking–until now.
The findings, published in the journal Primates, indicate that the most common behaviours observed were approaching the dead, touching and examining the carcass.
Elephants also appeared to use their advanced sense of smell to identify dead individuals, and they have observed vocalizing and attempting to lift or pull fallen elephants that had just died.
The research was led by Shifra Goldenberg, Ph.D., from the San Diego Zoo Institute for Conservation Research and the Smithsonian Conservation Biology Institute, and George Wittemyer, Ph.D., from Save the Elephants and the Department of Fish, Wildlife and Conservation Biology at Colorado State University.
The study consisted of a literature review of 32 original observations of wild elephant carcasses from 12 distinct sources across Africa.
“The most commonly recorded behaviour of elephants towards their dead included touching, approaching the dead animal and investigating the carcass,” said Goldenberg.
“The motivations underlying observed behaviors are hard to know, but clearly varied across circumstances and individuals. For example, some elephants made repeated visits to a carcass, and it’s possible that temporal gland streaming by a young female at the site of her mother’s carcass is associated with heightened emotion.”
Elephants form lasting relationships over decades, and individuals maintain different types of relationships across populations. They live in socially complex societies, in which social groups divide and merge over time.
These complex relationships necessitate recognizing and remembering a wide range of individuals in their species. Not surprisingly, elephants have demonstrated notable cognitive abilities, extensive memory and a highly sophisticated sense of smell.
“Witnessing elephants interact with their dead sends chills up one’s spine, as the behavior so clearly indicates advanced feeling,” said Wittemyer.
When greeting each other after separation, elephants engage in prolonged olfactory and tactile investigation, suggesting that they’re constantly updating social and spatial information.
It is possible that elephant behavior toward a carcass serves the same purpose as who an elephant interacts with and has important implications in an individual’s survival.
The researchers said they hope future studies will be performed to better understand elephant memory and further explore the possibility of grief and emotion in elephants’ responses to death. (ANI)

Amit Shah eyes BJP government in UP in 2017