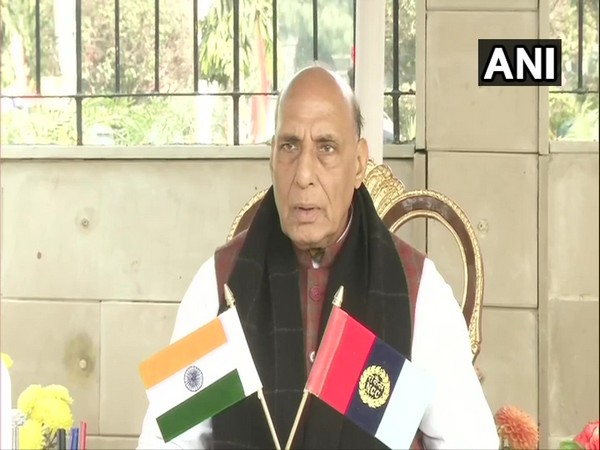 New Delhi [India], Jan 22 (ANI): The children in Jammu and Kashmir are nationalists but sometimes they are guided in the wrong direction and such people should be held responsible, Defence Minister Rajnath Singh said on Wednesday.
“Children in Jammu and Kashmir are nationalists too. They should not be viewed otherwise. Sometimes, people do not motivate them in the correct manner and they guide them in the wrong direction. Those who motivate them in the wrong direction should be held responsible and not the children or youth,” he said at the NCC Republic Day Camp here.
Singh’s comments came days after Chief of Defence Staff (CDS) General Bipin Rawat advocated the need to start deradicalisation programmes for the youth in Jammu and Kashmir.
“We should start counter-radicalisation programmes while identifying who are the people to have been radicalised and to what degree. Then look at them who are completely radicalised and then look towards the future. What we are seeing in Kashmir, young boys and girls as young as 10 years old have been radicalised, but they can still be isolated from radicalisation in a gradual manner,” General Rawat had said at the Raisina Dialogue 2020 last week.
Asked about people living on India-China border areas complaining that China’s People’s Liberation Army (PLA) troubles them, Singh asked the people not to be worry and trust the armed forces.
“Don’t worry. As far as our borders are concerned, place your trust in the armed forces of our country. No country has the courage to raise their eyes towards India,” he said. (ANI)