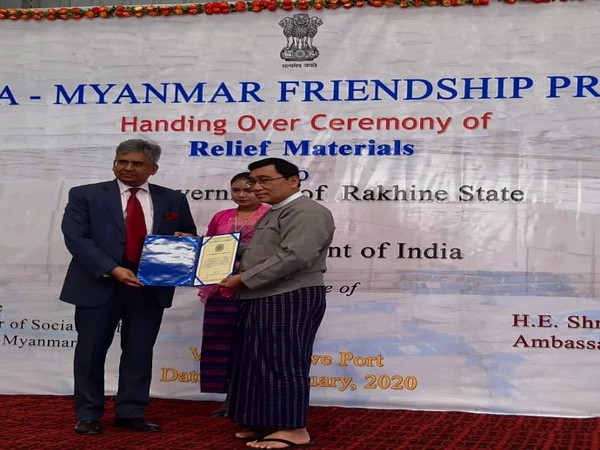 Naypyitaw [Myanmar], Jan 21 (ANI): India on Tuesday extended relief assistance to Rakhine residents who were displaced in the ongoing conflict in Myanmar as part of its continued endeavour to support the socio-economic development of the region.
The relief material comprised 20,000 kits of rice, noodles, toor dal, chana dal, soya oil, chili powder, turmeric powder, cumin powder, coriander powder, salt, and tarpaulin.
Ambassador of India to Myanmar Saurabh Kumar handed over the relief material to the government of Rakhine State in Sittwe city. The ceremony was also attended by Chief Minister of Rakhine State Nyi Pu, Social Welfare Minister of Myanmar Win Myat Aye, Deputy Minister of Social Welfare Soe Aung, and Speaker of Rakhine State Parliament San Kyaw Hla, according to an official statement.
India and Myanmar had signed a Memorandum of Understanding (MoU) in December 2017 on providing assistance to the socio-economic development of the Rakhine State. The programs under the agreement included the creation of an infrastructure in the areas of education, health, agriculture and allied activities, agro-processing, community development, and related training.
The agreement also included, inter alia, support for the construction of small bridges, up-gradation of roads, small power projects, livelihood activity, setting up of training centres, conservation of environmental and cultural heritage, empowerment of women and child welfare.
On 9 July 2019, 250 prefabricated houses were constructed for the displaced persons of Rakhine State under the agreement.
A set of additional projects related to construction of pre-schools, solar power supply, water supply, seed storage houses, incinerators in a hospital, agriculture mechanisation, roads construction, and provision of libraries and soft infrastructure at 15 schools are under advance consideration and will be implemented during the current year under the MoU, the statement said.
India has also conveyed its readiness to establish an India-Myanmar Industrial Training Centre in Rakhine State to impart skills to the youth of the State for greater employability under the agreement. Two such centres are already in operation in Pakokku and Myingyan and two others being established at the request of Myanmar government and will be operational soon at Monywa and Thaton.
Under its High Impact Community Development Projects (Small Development Projects scheme), last June, the Indian government provided IT equipment to Sittwe Computer University and agriculture equipment to Rakhine State Government.
Earlier, India had also provided medical equipment to upgrade the facilities at Sittwe General Hospital. (ANI)

Climate change due to deforestation worries people in Gilgit Baltistan

Being a mother is closest to me: Shilpa Shetty