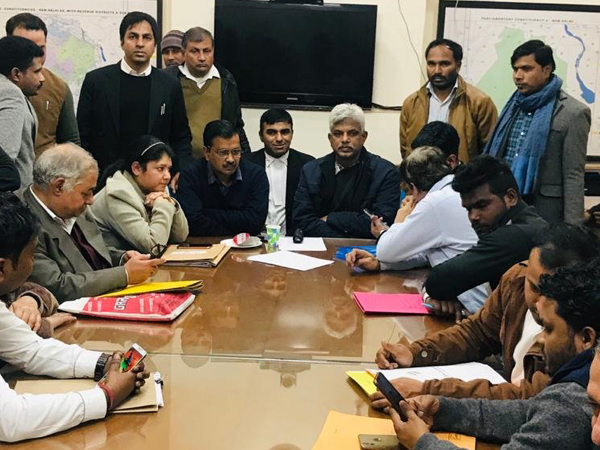 New Delhi [India], Jan 21 (ANI): After waiting for almost 6 hours, Delhi Chief Minister and Aam Aadmi Party (AAP) candidate Arvind Kejriwal on Tuesday filed his nomination papers from New Delhi constituency for the Assembly polls, scheduled to be held on February 8.
Kejriwal filed his nomination papers at the office of the Returning Officer here.
Earlier in the day, AAP leader Saurabh Bharadwaj said that Kejriwal’s process to file nomination papers was delayed by the candidates who have arrived at RO office to file their nomination as they were not having proper documents.
“Around 35 candidates are sitting at RO office without proper nomination papers, even without names of 10 proposers. They are insisting unless their papers are complete and file nomination, they will allow Chief Minister Kejriwal to file nomination,” he said.
He alleged that BJP is behind these people.
However, Kejriwal said that he was enjoying waiting with them.
“Waiting to file my nomination. My token no is 45. There are many people here to file nomination papers. Am so glad so many people participating in democracy,” Kejriwal tweeted.
“Does not matter. Many of them are filing for the first time. They are bound to make mistakes. We also made mistakes the first time. We should handhold them. I am enjoying waiting wid them. They are all part of my family,” he said in another tweet.
The ruling AAP has declared names of all 70 candidates for Delhi assembly polls. Kejriwal has won twice in the past from New Delhi constituency.
AAP had won a landslide victory in the last polls winning 67 of 70 seats.

The counting of votes will take place on February 11. (ANI)

After Kerala, West Bengal to pass anti-CAA resolution next week