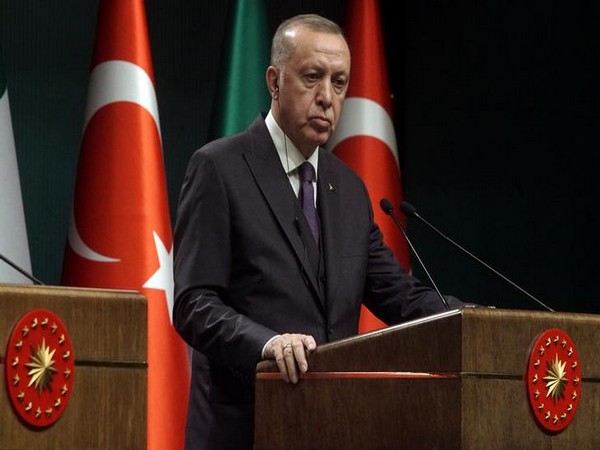 Ankara [Turkey], Jan 17 (ANI): Turkish President Recep Tayyip Erdogan on Thursday announced that his country will begin as soon as possible explorations for gas in the eastern Mediterranean this year.
“We will start search and drilling activities as soon as possible in 2020 after issuing licences for the areas,” Erdogan said during a two-hour speech in the Turkish capital.
He added that Turkey’s seismic exploration vessel Oruc Reis would soon be deployed there, according to Al Jazeera.
Ankara had angered neighbouring countries in the Mediterranean with an agreement signed with the Tripoli-based government in Libya last November, which claimed extensive areas of the sea for Turkey to explore.
Greece said that the deal fails to take into account the island of Crete, while Turkey has already upset Cyprus by sending ships to search for oil and gas off the divided island.
Erdogan said it was “no longer legally possible” for any search and drilling activities by other countries or a pipeline without Libya’s or Turkey’s approval.
Earlier this month, Greece, Cyprus, and Israel signed a deal to construct a pipeline to ship gas to Europe, despite Turkey’s vehement opposition.
In his remarks, Erdogan also noted that Ankara will send military forces to Libya to back the United Nations-recognised government based in Tripoli, the General National Accord (GNA), stating that his government will continue to use all diplomatic and military means to ensure regional stability, including in Libya.
Along with the maritime agreement, Turkey and Libya also signed a security deal in November, which was followed by the deployment of Turkish forces in the North African country.
While Turkey supports the GNA, countries such as Egypt and the United Arab Emirates back Libyan renegade commander Khalifa Haftar in his assault on Tripoli against the GNA.
Erdogan’s remarks come days before a key conference on the Libya crisis in Berlin. Germany’s foreign minister, Heiko Maas, headed to Libya on Thursday to persuade Haftar to join the summit on Sunday. (ANI)

Libya’s Haftar secretly flies to Greece ahead of Berlin summit

Smith is in outstanding form at the moment, says Ganguly