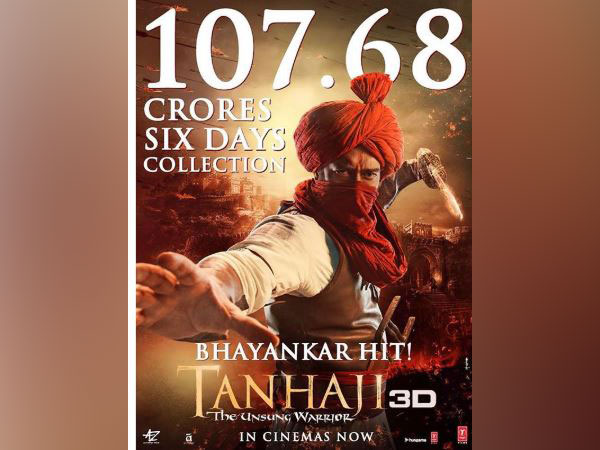 New Delhi [India], Jan 16 (ANI): Ajay Devgn’s 100th film — Tanhaji: The Unsung Warrior — has crashed the box-office as the movie enters the Rs 100 crore club in less than a week’s time.
The film saw a great Wednesday collection of Rs 16.72 crore, earning a total of Rs 107.68 crore in just six days.
The movie grossed Rs 15.10 crore on the first day. On Saturday and Sunday, the movie did get Rs 20.57 crore and Rs 26.26 crore respectively. The weekday collection of Monday, Tuesday and Wednesday has been peggged at Rs 13.75 cr, Rs 15.28 cr and Rs 16.72 cr respectively.
The flick has been receiving a unanimous response from critics and audience, generating a great word of mouth.
‘Tanhaji: The Unsung Warrior’ shows Ajay Devgn essaying the role of Maratha warrior Taanaji Malusare fighting for the principle of ‘Bhagwa’ (saffron) flag and ‘Swaraj’ (home-rule) and ‘Satya’ (truth).
Kajol, who essays the role of the wife of Tanhaji, Savitribai Malusare, is shown as a strong character, who accompanies him in taking firm decisions.
Saif Ali Khan, who plays the antagonist, comes out strong as Uday Bhan, a Rajput official, who works for Mughal Emperor Aurangzeb. The film is produced by Ajay Devgn’s ADF and Bhushan Kumar’s T-Series, and has been directed by Om Raut. (ANI)