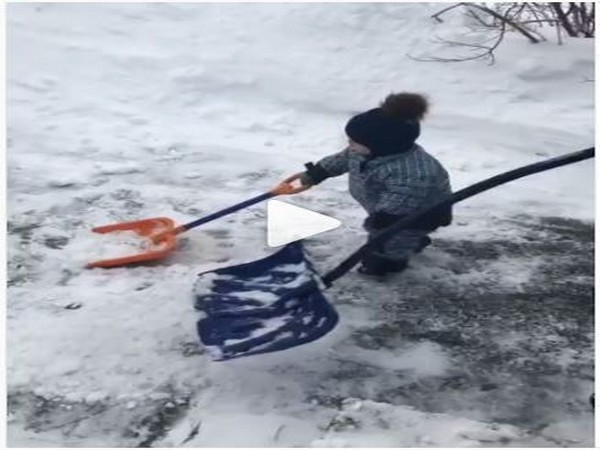 Ottawa [Canada], Jan 11 (ANI): A video of a toddler tipping over ice and then without being embarrassed continuing his work to shovel snow has taken the internet by storm.
The video was shot by a Canada resident, Burke-Basom, who later shared the video on Saturday with the caption, “Snow shoveling, the struggle is real,” on Facebook.
In the video, a 14-month-old infant can be seen trying to help his father in moving snow from the driveway. At one point, his shovel gets stuck in hard ice and as he starts to push harder he topples and falls with his head first (not hitting the ground hard).
His father runs to his rescue and pulls him up. With ease Rory, the kid keeps on carrying out his work.
The 8-second clip has been viewed over 20 million times, with users laughing and commenting at the kid’s plight.
“I’ve watched this 10 times already this morning! Thanks for the laughs!” one user wrote.
“It’s absolutely so funny,” another expressed, adding a series of laugh-cry emoji. “Little one, it’s hard I know.”
“Omg thats amazing. I can watch it over and over, have to laugh out loud every single time,” someone else commented.
The clip has also been shared on various social media platforms by innumerable users. (ANI)

Congress alleges jungle raj in UP, to hold online campaign