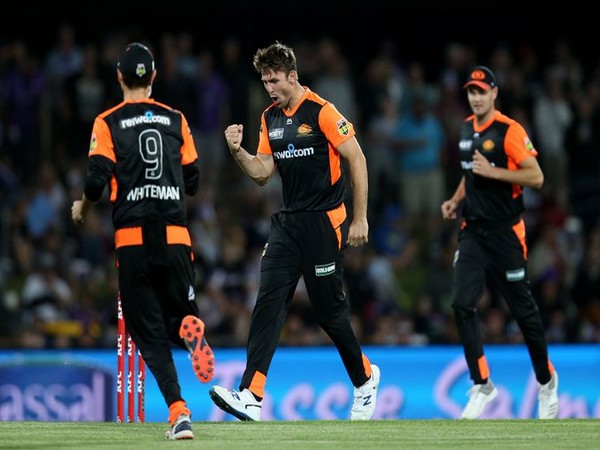 Hobart [Australia], Jan 13 (ANI): The heroic performance of Jhye Richardson and Josh Inglis handed Perth Scorchers a comfortable 77-run victory over Hobart Hurricanes in the ongoing Big Bash League (BBL) here on Monday.
Richardson bagged four wickets and returned to the figure of 4-19 in his four overs. Inglis hammered 73 runs off 46 balls studded with four sixes and as many fours. He was adjudged the Player of the Match.
Chasing 176, Hurricanes were bundled out at 98 runs in 17.1 overs. George Bailey (36), Caleb Jewell (28), and Simon Milenko (19) were the only batsmen who scored some respectable runs for the side.
Matthew Wade (3), David Miller (0), Clive Rose (1), and Ben McDermott (1) failed miserably to put up runs on the scoreboard. Hurricanes had the poor start and the side could not overcome that.
Fawad Ahmed and Liam Livingstone scalped two wickets each while Chris Jordan and Mitchell Marsh picked one wicket each.
Earlier, Scorchers were asked to bat first after losing the toss. The team posted a total of 175/7 in the allotted 20 overs.
Inglis (73) and skipper Marsh (40) guided the side to the massive total. Tim David (12) and Cameron Bancroft (14) also contributed some runs to the total.
Cameron Green remained unbeaten at 13 runs. Thomas Rogers clinched two wickets while Clive Rose and Nathan Ellis clinched one wicket each. (ANI)

Punjabi films will always be my first love: Surveen Chawla