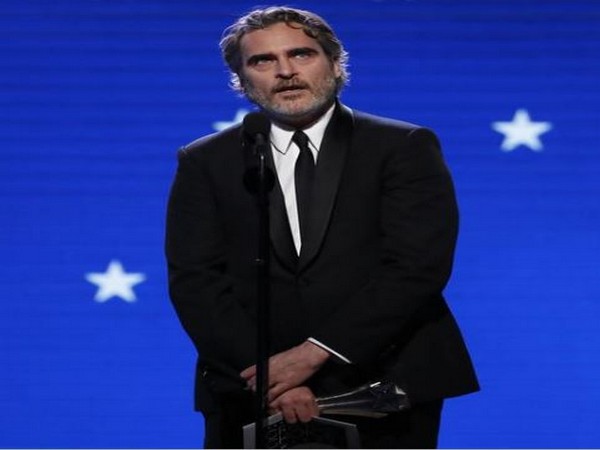 Washington D.C. (USA) Jan 13 (ANI): Joaquin Phoenix after taking globes home earlier this week, has bagged another prestigious award of the best actor for his exceptional performance in ‘Joker’ at the 2020 Critics’ Choice Awards on Sunday.
The 45-year-old actor had grabbed the award from the closely-fought category that included Antonia Banderas for ‘Pain and Glory’, Robert De Niro for ‘The Irishman’, Leonardo Di Caprio for ‘Once Upon A Time In Hollywood’, Adam Driver for ‘Marriage Story’, Eddie Murphy for ‘Dolemite Is My Name’, and Adam Sandler for ‘Uncut Gems’.
During his acceptance speech, the actor broke down a little as he was thanking his mother.
“I need to thank my mom,” he said, speaking of his mother, actress and social activist Arlyn Phoenix.
‘The Master’ actor further said, “Mom, you’ve always been my greatest inspiration. Even when self-pity led me astray, you didn’t give up on me…I appreciate your support.”
He further extended his gratitude towards, the makers of ‘Joker’ and said: “Scott Silver and Todd Phillips, you checked us. You took a comic book character and used it to talk about childhood trauma, gun violence, isolation, and mental health. And instead of inciting violence, you invited the audience in to see what it feels like when you’re one of the forgotten.”
Phoenix win at the 77th Golden Globes made history as it was the first time a comic-book based film won an award at the ceremony. (ANI)

China must be held accountable for its crime against humanity: Uighur activist Rushan Abbas

Kemar Roach will get 300 Test wickets quite easily: Courtney…