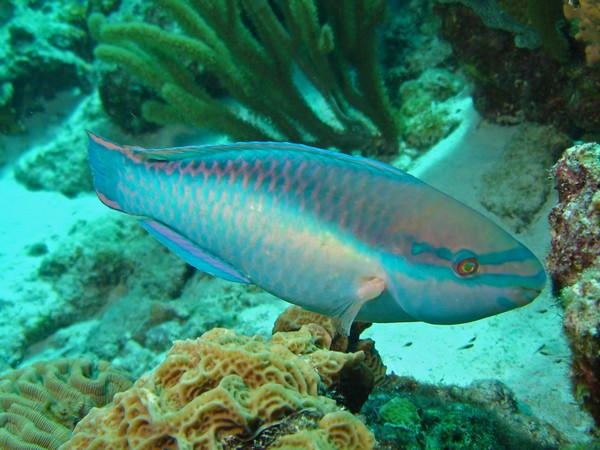 Washington D.C. [USA], Jan 11 (ANI): Fishing selective larger sea species, especially parrotfishes, can affect the coral health, states a recent study. This fishing practice can hamper the easily disruptive balance between algae and corals in Caribbean coral reefs.
The decrease in the number of parrotfish and similar fish species from the sea can result in over-growth of algae, thus overtaking and affecting the coral health.
The paper comprising the research by scientists at Penn State and the University of California, Santa Barbara appears online in the journal Ecological Monographs.
“Coral reefs are incredibly beautiful and intrinsically valuable, but they also protect thousands of miles of coastline and provide habitat for astonishing biodiversity that is the major source of protein for nearly a billion people worldwide,” said Andrew A. Shantz, Eberly Research Postdoctoral Fellow at Penn State and the first author of the paper, adding, “Understanding how fishing impacts coral ecosystems will help us to protect this invaluable resource.”
The researchers used survey data on parrotfish populations from 282 sites across the Caribbean and compared these sites to protected reefs in the Florida Keys to assess how parrotfish populations are impacted by fishing. Surprisingly, the biomass–the total mass of parrotfish in a region–was not impacted by fishing.
Instead, the distribution of fish sizes changed. Fishing selectively removes large parrotfish, but the biomass is maintained because many more small parrotfish are able to occupy the region.
“Because biomass remained basically the same in regions where there is heavy fishing, we were interested to see if different sized fish played different ecological roles,” said Shantz.
He also added, “We set up an experiment where we could exclude larger fish from accessing an area to see how changes in the distribution of fish sizes impacted corals and their relationship with algae.”
The experiment involved three different enclosures with different sized openings placed on the seafloor around corals in the protected Florida Keys.
One enclosure allowed access to fish of any size, the second excluded only the largest parrotfish, and the third excluded large and medium-sized parrotfish.
“We found that by excluding large parrotfish, the algae grew four times faster,” said Shantz, and stating, “By excluding both large and medium parrotfish, the algae grew ten times faster. So even though fishing does not reduce the biomass of the fish, it’s the larger fish that keep the algae at bay.
He concluded, “Unless we can develop and implement fishing strategies that maintain a healthy distribution of fish sizes–for example, a slot-based system with both minimum and maximum size restrictions–the corals in these regions are at risk.” (ANI)

High risk diseases can originate while body changes during puberty

Reason unveiled behind human inclination towards counter-clock side preference