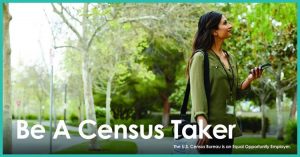 “We need people to apply now so they can be considered for part-time census taker positions next spring,” said Timothy Olson, Census Bureau associate director for field operations. “Recent high school graduates, veterans, retirees, military spouses, seasonal workers and applicants who are bilingual are highly encouraged to apply. It’s important we hire people in every community in order to have a complete and accurate census.”

Most households in the nation will receive invitations in the mail to respond (online, by phone or by mail) in March 2020. Census takers will be hired to work in their communities and go door to door to collect responses from those who do not respond as well as in remote regions.

The U.S. Constitution mandates that a census of the population be conducted once every 10 years. Census data are used to determine congressional representation in the states and how billions of dollars in federal funds are distributed to states and local communities every year for critical public services and infrastructure, including health clinics, schools, roads and emergency services.

No child should die in any corner of the country: Union Agri Minister on MP infant deaths

Depression and Anxiety Rates Widespread During the Pandemic in NYC: New Study

ComEd Reminds Customers to Plan Ahead During National Preparedness Month

Oakton Awarded $100,000 in Career and Technical Education Improvement Grants from…