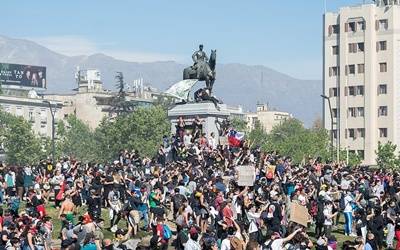 Santiago, Nov 2 (IANS) Thousands of Chileans who have taken to the streets over the last two weeks to denounce the country’s government were meeting in public venues to draw up proposals for radically overhauling the social, political and economic foundations of the society.

Some were informal, spontaneous gatherings, while others were organised by Social Unity Roundtable, a coalition of unions and grassroot organisations trying to formulate a coherent national programme for change.

"They are townhall meetings where the citizens can say what they want and have that included in a document that contains the requests raised by the people," Social Unity’s Belen Saavedra told Efe news on Friday.

On Thursday, Saavedra helped organise a meeting of some 50 people in Santiago’s Nunoa neighbourhood.

Amid demands for free education, better health care and higher wages and pensions, participants return again and again to the idea of convening a constituent assembly to draft a new constitution, she said.

So far, none of Chile’s existing parties has been able to claim the right to speak for the uprising that brought 1.2 million people – more than 5 per cent of the country’s population – into the centre of Santiago a week ago.

As of October 30, the death toll due to the protests climbed to 20 and the number of injured stood at 400.

"We understand that all the demands and reflections we make in the assemblies are political. The problem is when parties who want to co-opt that space arrive," Fernando Aguirre, coordinator of the assembly in Santiago’s Brasil neighbourhood, told Efe news.

He said he hopes to see the emergence of something akin to direct democracy.

Chilen President Sebastian Pinera, has announced plans for a dialogue with the citizenry, but the protesters show little interest in talking with the government.

For one thing, people no longer believe the President, according to Molina, who says the aim of the townhall meetings is a complete overhaul of the existing model.

"We need a new system from beginning to end. The people of Chile are shaking the foundations of the country, but the authorities seem unconvinced that they need to change," Molina added.

Pollution no problem for Team India, Rohit gives thumbs up to Ganguly

Will CPI member Kanhaiya Kumar switch to Congress after…