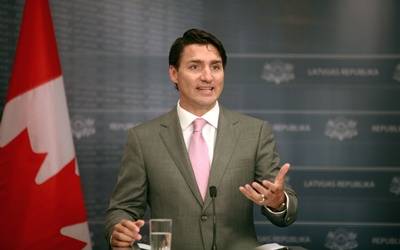 Atwal was issued an official invitation during Trudeau’s visit to a dinner reception celebrating Canada-India ties.

He was also photographed with Sophie Gregoire Trudeau during the India visit.

He was convicted of attempted murder in 1987, after shooting moderate Sikh politician Malkiat Singh Sidhu, who at the time was visiting family on Vancouver Island.

Atwal is a former member of the International Sikh Youth Federation (ISYF), a militant group fighting to establish an independent Sikh state in Punjab. The group was banned in Canada and designated a terrorist organization in 2003.

During Trudeau’s much-panned India visit last year, Indian Prime Minister Narendra Modi did not welcome him at the airport, and nor did he accompany Trudeau to his home state of Gujarat.

The snub was due Trudeau’s failure to denounce and condemn Sikh extremists and Khalistan terrorists in Canada.

In April 2017, Trudeau had attended a pro-Khalistan parade that featured shrines dedicated to Sikh terrorists. Trudeau was also photographed in front of a Khalistan independence flag.

Trudeau was also heavily criticized for other aspects of his India junket. His itinerary included seven days of sight-seeing with his family, several partisan Liberal political events, and only half a day of official bilateral meetings with government officials in the world’s largest democracy and Canada’s closest ally in Asia.

Sangha, who represents Brampton Centre, said: "There is no doubt, there cannot be two opinions that the Liberal party is pandering (to) Khalistan supporters," he said on the TV channel 5AAB.

"One thing is for sure when we raise this issue, it will raise an anti-India slogan or demand the division of India on some ground. In that, ultimately our relations, the Canada-India relationship will certainly develop cracks."

Asked if he thought the Liberal Party had a "soft corner" for Khalistanis, his response was clear.

"(The prime minister) said in strong words that we don’t want a divided India, we want a united and we will work for that," said Sangha.

"Sikh ministers, MPs of our Sikh brotherhood, these brothers of mine, they have their own… These are their own views and as long as they demand it, it is viewed that they are separatists. When this view surfaces, India also voices its hard view."

In reaction to Sangha’s interview, Trudeau’s Office released a statement.

"Canada’s position on a united India is unwavering and we are unanimous as a government on this issue. Canadians have the right to freedom of expression and speech and they have the right to peacefully express their views," the statement said.

US to send additional military assets to Syria