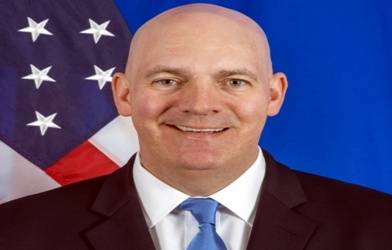 New York, May 30 (IANS) US Assistant Secretary of State for Political-Military Affairs Clarke Cooper is visiting New Delhi next week to discuss India’s role as a major defence partner, according to the State Department.

He will arrive in India after participating in the Shangri-La Dialogue, a major gathering of Asia’s defence leaders in Singapore, the State Department said on Wednesday.

Cooper’s trip comes ahead of an anticipated visit by Secretary of State Mike Pompeo next month.

Because of the formation of the new cabinet and the swearing-in of Prime Minister elect Narendra Modi scheduled for this week, India will not be represented at the ministerial level at the dialogue, where Cooper and other US officials will have an opportunity to hold bilateral meetings with leaders from around the region.

Therefore, Cooper’s New Delhi visit gives him an opportunity to catch up with India’s leaders fresh off their election victory.

Cooper will hold talks with them on defence cooperation and peacekeeping, "two key areas of the rapidly growing US-India partnership as envisioned in the (US President Donald Trump’s) Administration’s Indo-Pacific Strategy", the Department said.

"Talks will focus on supporting India’s role as a Major Defense Partner, expanding our security cooperation, and furthering opportunities for American industry," it added.

The Department noted that US-India bilateral defence trade has risen from virtually zero in 2008 to $15 billion now.

Cooper is scheduled to go to Sri Lanka after his India visit. There he will discuss counter-terrorism, security, peacekeeping and clearance of landmines and unexploded ordnance, the Department said.

Acting Secretary of Defence Patrick Shanahan will be leading the US team to the Shangri-La Dialogue that takes place from May 31 to June 2.

His statements about the US Indo-Pacific strategy at the dialogue will be watched keenly as China’s Defence Minister Wei Fenghe will also be there.

It will be the first time such a high-level Chinese official will be attending the dialogue organised by the International Institute for Strategic Studies.

Modi was the keynote speaker at the dialogue last year. Singaporean Prime Minister Lee Hsien Loong, will deliver the keynote address this year.

Virginia fears Afghanistan evacuees may have exposed locals to MEASLES, but says high…

I didn’t really drive the ball very good in final round:…