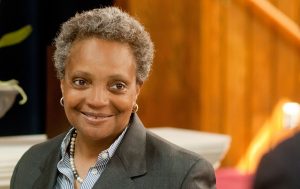 By Mayank Chhaya
Special to Hi India
Chicago: Defying the notorious Chicago machine politics Lori Lightfoot has become the first African American woman and the first openly gay politician to have been elected of Mayor of this third largest American city.
Lightfoot also has the distinction of being the first Chicago mayor in decades not born in Chicago. The 56-year-old former federal prosecutor and a corporate attorney was born in Massillon, Ohio.

Elsewhere in two major races of great interest to the large Indian American community in Schaumburg and Naperville, Tom Dailly and Steve Chirico won comfortably, with the latter scoring his second term as Illinois’ fourth largest municipality.
Dailly, who was endorsed by Hi India, won handily over his nearest rival, Nafees Rahman, a manager in the Illinois secretary of state’s office and son of Pakistani immigrants, on the basis of his long experience in town’s affairs as a Village Trustee.
Dailly has become the first new mayor of Schaumburg in over three decades after his predecessor and mentors Al Larson retired after serving for 32 years. One of Dailly’s commitments of political and civic significance to Schaumburg’s nearly 18,000 residents of Indian, Pakistani and Bangladeshi heritage out of the total population of nearly 80,000, is to increase diversity at all levels.
“We need diversity at all levels, in committees, commissions, and staffing. As mayor I plan to make commissions more diverse because the mayor can make those appointments directly,” he had told Hi India going into the election. In terms of inclusiveness and diversity, Dailly has stepped up his interactions with the Indian American community. “This is a very important community for us because they are engaged both as successful professionals as well as small business owners. They make Schaumburg vibrant. I have been welcomed with great warmth by the Indian American community,” he had said.

“The Indian culture fascinates me and I want to make sure it is included in what we do. I have been thinking a lot of about how to make the village more inclusive and to that end I have had interactions with the Indian American community,” Dailly had said.
In Naperville, with a total population of a little over 147,000, Chirico’s reelection was widely expected over his challenger Richard “Rocky” Caylor, a Marine veteran and president and CEO of a logistics company. The town’s Asian population is estimated to be 26,212 of which Indians constitute a substantial number. Chirico has long been plugged in with the town’s Indian American community.

Meanwhile, in Lincolnwood, the Alliance for Lincolnwood dominated the race for three trustee seats with the incumbent Jesal Patel winning.

One interesting feature of Chicago, Naperville and Schaumburg demographics is that there is a large presence of Indians from southern Indian states, particularly Andhra Pradesh, many of whom are IT professionals. Chicago has in recent years emerged as an important IT hub.
Quite clearly though, the slew of mayoral and other elections in Chicagoland were overshadowed by an extraordinary runoff between Mayor-elect Lightwood and her well-oiled Chicago politician Toni Preckwinkle. The fact that no matter who won between the two, history would have been created irrespective because either would be the first African American woman mayor of Chicago, was an important element of the race. Perckwinkle is regarded as a quintessential Chicago insider as the current Cook County Board President. At the time she was elected in 2010, she had created her own history being the first woman to be elected to that position. However, in the end, the runoff election between the two formidable candidates turned out to be rather one-sided as Lightfoot managed to win over 74 percent of the votes on the night of April 2 to Perckwinkle’s about 26 percent.

The campaign had its share of Chicago’s nasty tactics with Perckwinkle’s campaign releasing a TV ad about what it said was Lightfoot’s investigation into a critical failure of the 911 call center. The ad drew on a 2004 West Side fire tragedy that killed four children. On her part, Lightfoot attacked Perckwinkle for running a corrupt political machine and in particular pointed out her ties with Alderman Edward Burke who was indicted for extortion.
As she prepares to take over the city of 2.716 million (2017) on May 20, Lightfoot has her work cut out. Among her most important challenges would be Chicago’s crime scene. According to the Associated Press, 561 homicides were committed between Jan. 1 and Dec. 31, 2018. “That compares to 660 homicides in 2017 and more than 770 in 2016, which marked a 19-year high that put a national spotlight on Chicago’s persistently high rates of gun violence,” the agency reported.
After her victory, Lightfoot foreshadowed some of her priorities saying she wants to turn Chicago around so that “your ZIP code doesn’t determine your destiny.” She spoke of all of the city’s neighborhoods growing together.
“We can and we will break this city’s cycle of corruption,” she said. “We will not let politicians profit from their positions. We can and we will remake Chicago.”
As a former president of the Chicago Police Board, and former Police Accountability Task Force chair, Lightfoot enjoys a reputation as a police reformer. She has called for sweeping changes at the Chicago Police Department, to end a “history of racial disparity and discrimination.”
Lightfoot’s has been a remarkable story, rising from the small town of Massillon, Ohio, 400 miles from here to helm a world-class metropolis famous for its architecture, comedy circuit and jazz music, not to mention the deep dish pizza. As Lolly Bowean of the Chicago Tribune pointed out in a profile, “She was a celebrated point guard on the basketball team, sang in the choir, played trumpet in the band and, by being elected president of her class three times in a row, she demonstrated that she was a standout among the students at Washington High School in Massillon, Ohio.”
She will be among seven other black women currently serving as mayors in major U.S. cities, including Atlanta and New Orleans. As an openly gay politician, with a wife and a daughter, Lightfoot is the face of a new America where the gay community has in the last five years or so found remarkable acceptance; in some ways to the extent that it is incidental and even extraneous to people’s core professional skills and strengths.

Now or never for RCB against Delhi Capitals

Salah strike in Merseyside derby proclaimed goal of the year

Public apology by way of atonement expected: WB Governor to…

Mozambique to receive first batch of Varanasi made…