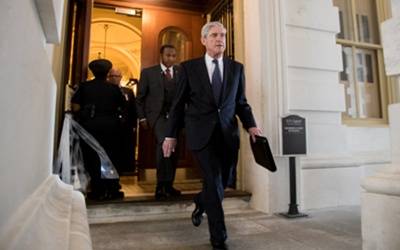 New York, March 23 (IANS) Special Counsel Robert Mueller, who delved into the murky depths of the 2016 election looking for links between President Donald Trump’s campaign and Russia, has completed his probe and a tense nation awaits his findings that will profoundly affect the future of US politics.

Mueller submitted his report on Friday evening to Attorney General William Barr, who wrote to Congressional leaders that he may share its key findings this weekend.

He has the prerogative to keep parts of it secret, but the House of Representatives with near unanimity, called for it to be released in full, and Trump has backed it.

Even before Mueller completed his inquiry, the probe’s tentacles reached deep into Trump’s inner circle and led to the conviction of five important members, including former campaign chairman Paul Manafort, his personal lawyer Michael Cohen and former National Security Adviser Michael Flynn on various charges, like lying during investigations and others that were collateral like tax and financial fraud unrelated to the Russian link.

After the 2016 election vaulted Trump, an outsider to traditional politics, into the presidency after his unconventional and divisive campaign defeated Hillary Clinton, the Democrats saw the hand of Russia and demanded the probe that coloured US politics for nearly two years.

Whether the report produced after 22 months of investigations connects Trump personally to the Russian interference or not, either way it will impact US politics in the short as well as in the long term.

And the odds appear to be that it does not signal a criminal, direct Trump-Russia connection because senior Justice Department officials in background briefings to US media said on Friday night that Mueller has not recommended any more prosecutions beyond those that have been launched.

Republican Senator Steve Scalise declared that this confirmed that "there was never any collusion with Russia".

Trump, who has kept a steady Twitter fire denouncing Mueller’s probe as a "witchhunt", can claim vindication and continue in office.

But his adversaries are not convinced and the most saw the Mueller probe as the ultimate weapon to drive Trump out of the office.

If there is even the slightest hint that Trump willingly collaborated with the Russians or condoned his campaign’s links with them, the "I-Word" – impeachment – looms.

Whatever the report reveals, Representative Rashida Tlaib has said she will introduce an impeachment resolution while Representative Brad Sherman has already framed the charges for it.

But the Democrat leadership and others were wary of such a course because of its impact on the deeply – and dangerously – divided nation.

According to a RealClearPolitics aggregation of recent opinion polls, Trump has an approval rating of 42.5 per cent, with one poll by USA Today showing 48 per cent.

James Comey, the former Federal Bureau of Investigation who was dismissed by Trump, said that he considered the latter as "morally unfit to be president", but warned in a New York Times op-ed against an impeachment.

"If Mr. Trump were removed from office by Congress, a significant portion of this country would see this as a coup, and it would drive those people farther from the common centre of American life, more deeply fracturing our country," he wrote.

Impeaching Trump is "just not worth it", Speaker Nancy Pelosi told the Washington Post earlier this month. "Impeachment is so divisive to the country that unless there’s something so compelling and overwhelming and bipartisan, I don’t think we should go down that path, because it divides the country."

Congressional Democrat Hakeem Jeffries said that the vast majority of his party Representatives want to "proceed with caution".

But Trump’s opposition in the Democratic Party and also among Republicans will seek to find enough ammunition to step up attacks on his fitness for office and his credibility.

Whatever the report may say, a "Plan B" is already in operation with several investigations handed off by Mueller to federal prosecutors. Their counterparts in Democratic-controlled states are also targeting Trump associates under state laws and the Mueller findings might give them the ammunition to go after them, and possibly the president himself.

According to some reports, New York City prosecutors may take a look at Trump family members.

The Democratic Party-controlled House is also ready to launch several investigations against Trump and his inner circle.

It is widely accepted that Russians had a hand in leaking to WikiLeaks internal emails of Democrats that exposed internal manipulations that cast them in a negative light and caused divisions within the party ranks that helped Trump.

Russians trolls, whether operating on behalf of President Vladimir Putin or financed by others, used social media to boost Trump in innovative ways — not just through outright propaganda, but by sharpening existing ideological, racial, economic and social divisions to either suppress or increase participation by voter segments.

Many Russians have been charged in connection with those campaigns.

One of them, lawyer Natalia Veselnitskaya, is charged with money laundering and she is alleged to have met Manafort, Donald Trump Jr., and Jared Kushner in New York’s Trump Tower in June 2016 offering dirt on Clinton.

The picture has been muddied by Trump’s real estate company’s negotiations with Russians that continued during his campaign and they may lead to further investigations about them. His lawyer Cohen admitted in a federal court that he was guilty of lying when he told Congress that the discussions had ended in January 2016 when they continued through June.

The Mueller investigation has been controversial from the start. In May 2017, then-Attorney General Jeff Sessions, who had been a member of the Trump campaign, recused himself and handed off the issue to his deputy, Rod Rosenstein, who appointed Mueller.

Trump railed against Sessions for not taking charge of the probe and later dismissed him.

Trump also fired Comey, who had been involved in the early Russia probe, reportedly because he would not drop investigations of Flynn.

These could be construed as grounds for Congressional investigations of charges of obstruction of justice by Trump, which would be a criminal offence.