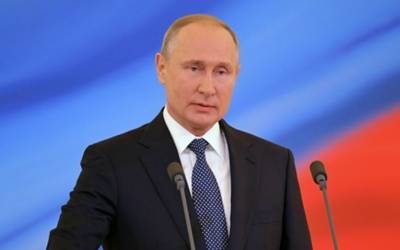 Washington, Nov 30 (IANS) Despite Moscow’s olive branch for a summit, US President Donald Trump has said that considering the unsolved Russia-Ukraine confrontation, it would be "best" to cancel his scheduled meeting with Russian President Vladimir Putin.

Trump tweeted during his flight to Argentina that "based on the fact that the ships and sailors have not been returned to Ukraine from Russia, I have decided it would be best for all parties concerned to cancel my previously scheduled meeting … in Argentina with President Vladimir Putin."

"I look forward to a meaningful Summit again as soon as this situation is resolved!" he added, Xinhua news agency reported.

The statement marked a dramatic U-turn of his attitude hours ago, before leaving for Argentina to attend the Group of 20 (G20) summit, when Trump said he "probably" would meet with Putin.

"I think it’s a very good time to have the meeting," he said.

He added that he would get a final report on the Ukraine-Russia tension during the upcoming flight.

"I’m getting a full report on the plane as to what happened with respect to that and that will determine what I’m going to be doing," Trump said.

The ongoing probe of Trump’s alleged links with Russia inside the US, together with Russia’s strained relations with Ukraine, has made the high-profile scheduled meeting a subject of uncertainty and sensitivity on the US side, ever since Moscow and Washington announced it before Trump’s trip to France earlier this year.

Trump on Tuesday threatened to cancel the meeting due to his displeasure with Russia’s alleged "aggression" of Ukraine near the Kerch Strait that separates the Black Sea and the Sea of Azov.

Kremlin spokesman Dmitry Peskov confirmed on Thursday that Putin and Trump would have a brief one-on-one meeting on the sidelines of the G20 summit, and that Russian-US negotiations with a larger number of participants would take place and might last about an hour.

"We don’t have to agree on all these issues since it is probably impossible, but we will have to talk as this is in the interests of not only our two countries but of the whole world," the spokesman said.

The Ukrainian Navy said that it had informed Russia in advance about the passage of Ukrainian vessels from the Black Sea to the Sea of Azov through the Kerch Strait.

The Ukrainian parliament on Monday supported a bill imposing a martial law in certain regions for 30 days starting from Wednesday due to the tensions with Russia in the Sea of Azov.

Sensex, Nifty open in green ahead of key macro data

Indian golfer Khalin fires 65 to be second in Bangladesh…