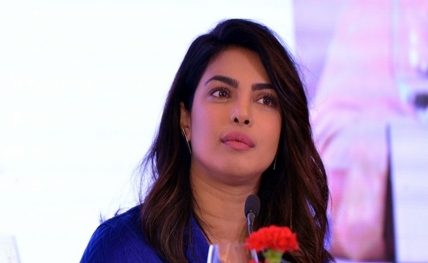 Mumbai, July 5 : Bollywood star Priyanka Chopra has garnered 25 million followers on Instagram and has thanked her fans for showering her with so much of love.

Priyanka on Thursday took to her Instagram stories, where she wrote: "25 million strong… Thank you for the love… Love you right back."

The "Baywatch" star is also ahead of her rumoured beau and pop singer Nick Jonas, who has a following of 15.5 million on Instagram.

Priyanka is an ardent user of digital platforms and uses social media to stay connected with her fans and followers.

On the acting front, Priyanka will soon be seen sharing screen space with Salman in the upcoming film "Bharat", which is directed by Ali Abbas Zafar.

This will be Zafar’s third outing with the "Dabangg" actor, with whom he has worked in blockbusters "Sultan" and "Tiger Zinda Hai".

Priyanka will be teaming up with Salman on the big screen after a gap of 11 years, after their last appearance in "God Tussi Great Ho" in 2008.

"Bharat" is an official adaptation of a 2014 South Korean film "Ode To My Father". It is produced by Atul Agnihotri’s Reel Life Production Pvt Ltd and Bhushan Kumar’s T-Series.