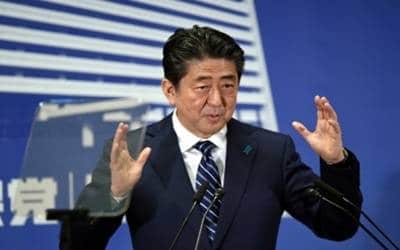 Tokyo, April 16 (IANS) Japanese Prime Minister Shinzo Abe’s popularity ratings hit its lowest since he took office in 2012, following his role in an alleged cronyism scandal, according to polls released on Monday.

The Prime Minister’s popularity hit a record low of 26.7 per cent in a survey conducted by Nippon TV, while according to Asahi’s survey it fell by 31 per cent, the lowest in more than five years of Abe’s term, much lower than April 2013, when his rating peaked at 65.7 per cent, reports Efe news.

Abe’s popularity plunged more than 10 points, after his Finance Minister had admitted in March that his ministry had faked documents related to the sale of state-owned land at around one-tenth of its price to a private educational institution, with alleged links to the Prime Minister and his wife, Akie Abe.

The new ratings come after nearly 50,000 people demonstrated over the weekend in Tokyo against Abe’s government and demanded his resignation, calling him a "liar".

The alleged cronyism scandal came to light in February 2017 but had died down until the Finance Minister had admitted to doctoring documents at the beginning of March, which led Abe to appear before Parliament where he denied his and his wife’s involvement in the scandal.

Kohli gives us freedom to play to our strength, says Shami