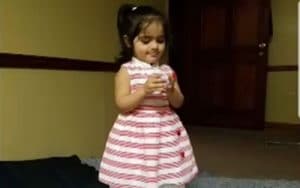 RIVERDALE, GA — A 2-year-old Indian American girl died on March 2 night after a mirror fell on top of her at a Payless ShoeSource store in Riverdale, Georgia.

Ifrah Siddique and her mother had gone shoe shopping for the little angel when an unsecured mirror fell on her.

Siddique’s family is now devastated that their little girl is no more and questioning how just a simple shopping trip ended on being the last day of her life.

“You wouldn’t really expect it. We are all in the state of shock,” said Aqib Iftkhar, a cousin of Siddique’s.

La Tisha Tultaick, who works next door to the Payless store, told reporters that she heard screams and tried to help but emergency personnel asked her to step back.

“I just saw blood and the little girl, but she was just lying there lifeless,” she said.

The little girl was then taken to a local hospital where she later died of internal bleeding and blood loss.

The company released a statement saying, “Our deepest sympathies go out to the family of Ifrah Siddique during this time of incredible loss. We are devastated by this tragic event and are fully cooperating with authorities to research and understand the nature of this accident.”

Iftkhar responded, “at least they are fixing it, but still the question is: Why wasn’t it secured in the first place?”