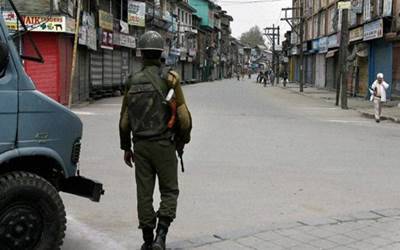 Srinagar, Dec 6 (IANS) One of the four militants who killed an Army soldier while on leave in Jammu and Kashmir’s Shopian district has been arrested, police announced on Wednesday.

A statement from the police said Muzamil and the other three hatched a conspiracy to kill Sepoy Irfan Dar who was with the Territorial Army. Muzamil was described as a co-conspirator.

The bullet-riddled body of the soldier was recovered from village Wuthmula on November 25.

"Investigation conducted so far has revealed that militants Saddam Padder, Touseef and a newly recruited unidentified militant along with the arrested Muzamil hatched a criminal conspiracy to kill Dar," the statement said.

Police said Muzamil went to Dar’s village and took him to Wuthmula were the other three militants were already present at an orchard.

"They came out from the orchard and fired at the Sepoy, resulting in his death on the spot."

BJP warns Mamata it would take Bengal government to task