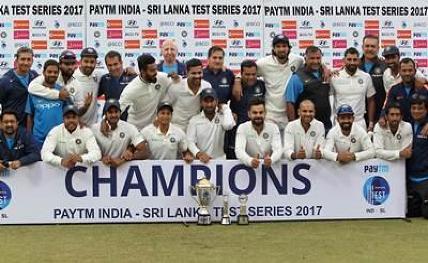 Australia achieved the feat over a period of three years, remaining unbeaten from October 2005 to June 2008. The top ranked Indian team on the other hand, started their undefeated run from the tour to Sri Lanka in July 2015.

The 2015 tour, which marked current head coach Ravi Shastri's debut at the helm as then Team Director, saw India winning by a 2-0 margin.

Following that, India recorded a 3-0 win against South Africa at home towards the end of 2015 before registering a 2-0 win during the West Indies tour in 2016.

In 2016, India thrashed New Zealand 3-0 at home before humiliating England for a 4-0 whitewash.

The 2017 season started with a 1-0 win against Bangladesh in an one-off Test series which followed a 2-1 thrashing of Australia in March.

India then completed a 3-0 whitewash of Sri Lanka in their own backyard before finishing the home season with a 1-0 win over the islanders to equal Australia's record.

The Kohli-led side will now aim to stretch their record when they land in South Africa later this month for a three-Test rubber against the Proteas, starting January 5 in Capetown.

National Award panel not qualified enough for Big B: Ram…